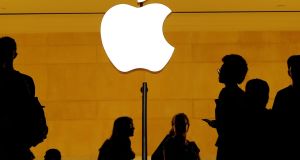 Apple’s suppliers are preparing to produce components for up to 75 million new iPhones in 2019’s second half, roughly the same number as a year earlier, according to people familiar with the matter.

The volumes planned for the next iPhone launch cycle would signal steady demand for the company’s most important product, despite US-China trade tensions and a decline in the overall smartphone market. The Cupertino, California-based technology giant stopped divulging iPhone shipment numbers in the holiday quarter last year as unit growth turned negative and started providing metrics to highlight the growth of services such as Apple Music. Analysts estimate Apple sold 70 million to 80 million new iPhones in the second half of last year.

The company’s Asian suppliers are gearing up to produce components for three new iPhone models to meet holiday-season demand, the people said, asking not to be identified citing internal estimates. The US company’s Asian partners could ramp production up to 80 million new phones if needed, one of the people said. Main iPhone assembler Foxconn Technology Group has stepped up hiring in Shenzhen and is offering staff about 10 per cent more than a year ago to secure a peak-period workforce, another person familiar with the matter said.

Apple has announced new iPhones each September since 2012 and the new models typically go on sale in the final weeks of that month. The company reports third quarter earnings on July 30th, and the firm’s guidance could indicate its expectations for iPhone sales at the end of the fourth quarter ending in September. Apple still provides iPhone revenue figures, with the company generating $52 billion from iPhones last holiday quarter, a 15 per cent decline, and $37 billion from new iPhones in the last fourth quarter, a 27 per cent increase. Those numbers, however, include a mix of both last year’s new models and earlier versions of the iPhone.

This year’s volumes may signal stabilisation after a year of uncertainty, though that’s a far cry from the double-digit growth numbers of years past.

Of course, the fact that Apple suppliers plan to produce parts for 75 million new iPhones doesn’t necessarily mean the company will sell that many. Apple will assess sales after launch and the total shipments may not reach that mark. The company declined to comment.

Apple is struggling with soft smartphone demand as people take longer to replace their gadgets and Chinese rivals like Huawei grab market share. The trade war is also denting Chinese economic growth while souring consumers there on American brands. Analysts have been betting on a 13.3 per cent drop in iPhone shipments to roughly 189 million in fiscal 2019, according to average projections compiled by Bloomberg.

While Apple is relying on services to take up the slack, sales of the gadget remain its largest revenue driver and the US company needs to get the latest devices into the hands of its users so they can actually download and subscribe to new services like the upcoming Apple Card, Apple Arcade gaming service, and Apple TV+, a Netflix rival.

The major attraction in this year’s models lies in enhanced cameras: the two high-end models to replace the iPhone XS and iPhone XS Max will include three back cameras, up from two, and a successor to the iPhone XR will include a second back camera. The third camera will serve as an additional ultra-wide lens, Bloomberg News reported in January, allowing the phone to automatically repair parts of an image that may be initially chopped out of a frame. It will also enable a wider range of zoom.

Beyond the additional rear cameras, the new iPhone models will look similar to the 2018 versions, which looked like the 2017 iPhone X. Apple is planning a more extensive revamp of the iPhone with an updated design, 5G connectivity, and new augmented reality cameras for 2020, Bloomberg has also reported.

Wall Street sentiment on Apple may be starting to brighten somewhat after a prolonged period of investor-pessimism. Morgan Stanley boosted its target price on the stock this week, days after another firm upgraded the shares. – Bloomberg