Fintech has developed technology to protect companies against currency fluctuations 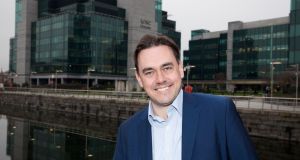 A provider of foreign exchange technology to protect companies against currency fluctuations, the start-up is aiming to double headcount over the next year to 30 people as it seeks to build on an increase in business, largely due to Brexit uncertainty.

“We’re actively targeting financial firms all over Europe and so are looking to beef up our sales team, particularly in the UK. We also want to add more people on the tech side,” said founder and chief executive Barry McCarthy.

“I am really living the entrepreneur’s dream right now where we’ve got funding, have a great team and are building really cool products so it is an exciting time and I’m trying to savour every minute of it,” he added.

Assure Hedge was founded by Mr McCarthy in March 2016 after he had spent the previous 15 years working as a financial markets trader.

The company, which is fully regulated in Ireland and in 31 other countries across Europe, has developed a platform that makes it easier for businesses to eliminate uncertainty around their forex exposure.

Recently appointed chairman Richard Hayes, who founded and led IFG Group for 17 years and was also chairman of Global Shares, led the latest fundraise along with Rob Smith, who was previously chief technology officer at global electronic trading and market-making company Getco. Each invested about €600,000 with a number of angel investors also backing the start-up.

Assure Hedge has moved away from dealing directly with small businesses towards working primarily with banks and foreign exchange brokers.

“We found we offered way more value by partnering with FX brokers that have tens of thousands of customers on their platform and want to add-on risk-management capabilities to complement what they are currently doing,” said Mr McCarthy.

“I’d love to say that was the plan all along for but it isn’t true. I initially saw us as being like a Revolut for hedging but we found it difficult attracting smaller businesses and realised that our competence as a company was more in being financially regulated in developing products rather than bothering with the go-to-consumer side of things,” he added.

Assure Hedge, which is based at Dogpatch Labs in Dublin, is also currently working with banking software giant Temenos, enabling it to access banks through the company’s platform.

Mr McCarthy admitted that the company is one of only a handful to be benefitting from Brexit uncertainty.

“Anytime there is uncertainty there is potential volatility and so Brexit is good for us as our products can reduce associated currency risks,” he said.