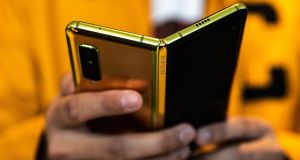 Samsung will begin selling its Galaxy Fold in September, resurrecting a device it pulled months ago after early reviewers reported defects in the gadget’s much-touted flexible screen.

The world’s biggest smartphone maker is conducting final testing after making a series of modifications to the device, and said in an online post it will sell the phone in select markets without elaborating.

Samsung cancelled the April 26th launch of the $1,980 (€1,779) device after the folding displays on review models exhibited problems. It was to have been the company’s crowning achievement, the world’s first mass-produced foldable smartphone and a symbol of technological prowess. But some models developed issues after mere days of use: Bloomberg’s review unit failed to function properly after a plastic layer covering the screen was removed, and a small tear developed at the top of the hinge where the gadget opened.

The postponement - after years of development - marked a painful setback for a company that had bet on its latest innovation to extend its dominance and help revive a stagnating global smartphone market. The South Korea-based company was keen however to avoid the kind of fiasco it suffered in 2016 when it recalled the Note 7, a premium phone that showed a tendency to burst into flames.

Samsung has since redesigned the Galaxy Fold, adjusting the protective film so it wraps around the entire screen and flows into the outer bezels, rendering it impossible to peel off by hand, Bloomberg News has reported. It also re-engineered the hinge, pushing it slightly upward from the screen to help stretch the film further when the phone opens. On Thursday, Samsung confirmed the display modifications in its post.

“I’m sure that part of Samsung’s motivation with this product is to secure the bragging rights of being the first in the industry,” said Bryan Ma, vice president of device research at consultancy IDC. “But a more important reason is to get a head-start in learning how to develop this new category of product. And clearly they’ve learned their lessons, even if it was done the hard way.”

Samsung is trying to steal a march on Chinese rivals Xiaomi and Huawei, which are trying to put out their own devices to stake a claim to a potentially massive market. Foldable phones let users double their screen real estate while also keeping devices compact enough to fit into a pocket. But analysts say it’s unclear whether companies can develop apps to fully take advantage of the innovative screen. Samsung projected before the April postponement that it would produce at least a million units of its foldable phone this year, a sliver of overall annual shipments. The Galaxy Fold’s delay means it will launch around the same time Apple typically unveils its latest iPhones.

The race between Samsung and Huawei comes at a time both companies are grappling with intensifying trade tensions that are disrupting global supply chains. Samsung is scrambling to secure key materials for chips and displays that have been targeted by Japanese export restrictions, while Huawei is bracing for a steep drop in overseas phone sales after the US slapped curbs on the sale of American technology to the Chinese company. In June, CNBC reported Huawei was also delaying the launch of its foldable Mate X to September to conduct more testing. – Bloomberg