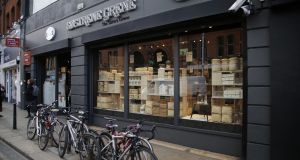 About seven per cent of the State’s total tax take, equating to €4 billion, now comes from just 10 firms, the Department of Finance’s chief economist has confirmed. Eoin Burke-Kennedy has the details.

The volume of mortgage approvals fell in November compared to the previous month with first time buyers and movers receiving fewer offers of credit from lenders. The value of the mortgages approved also fell, reports Peter Hamilton

Plans are afoot to sign up 75 new “business angels” this year to invest in fast-growing Irish start-ups. Charlie Taylor has the details.

Long term investor BGF has made its first investment in the Republic with the acquisition of a stake in nursing home group Brindley Healthcare. Peter Hamilton reports.

Vietnam is an open economy, just like we are, writes John FitzGerald. And the winds of economic change can become gales that batter both countries.

Online retailing is devastating traditional shops is the retail narrative of our times, yet Mark Paul meets those who are not alone surviving but are thriving in the new world order.

The figures the IDA published on Thursday show a record 230,000 people work for the companies that it has lured here. Peter Hamilton and Barry O’Halloran analyse what’s going on.