Brexit not the only danger on the horizon for Ireland 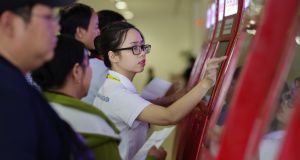 An employee assists travellers with Vietjet Aviation JSC self check-in kiosks at the Tan Son Nhat International Airport in Ho Chi Minh City. Any disruption to the Chinese economy will have serious consequences for Vietnam. Photograph: Maika Elan/Bloomberg

The public’s focus has largely been on the negative economic implications of Brexit for Ireland over the past year but this is not the only external danger on the horizon.

The disruptive nature of current US trade policy also poses major dangers for the world economy, and especially for Ireland, as one of the world economies most dependent on international trade.

Modern economies are heavily interconnected. Most goods and services now involve elements produced in many countries, and supply chains that can extend around the globe. So both the goods we produce and those we consume involve a myriad of trade links.

Disruptions to these linkages can have unpredictable negative consequences for us all. A full-blown trade war between the US and China, for instance, would have far-reaching effects.

The share of exports in domestic output (GDP) is a good measure of how globally interconnected any economy is. In only six countries exports actually exceed national output because these exports have a high import content. Ireland is one of these.

Like Ireland, most of the other super-open economies – Luxembourg, Malta, Singapore and the United Arab Emirates (UAE) – have a relatively small population. The exception is Vietnam, with around 95 million people. Given its globalised economy, Vietnam is particularly vulnerable to the potential effects of a trade war.

The two most important drivers of Vietnam’s economic growth are, first, the progress of the US economy, and second, that of China. Any serious falling-out between its two most important trading partners is likely to have serious consequences for Vietnam.

From the late 1990s, Vietnam began to benefit from “crumbs” falling from the table of the richer Chinese economy north of the border. It progressively became more interdependent with China. Today, a significant proportion of Vietnamese exports are either destined for inclusion in Chinese products, or already contain a substantial Chinese import content. Thus any disruption to the Chinese economy will have inevitable consequences for Vietnam.

Given the erratic nature of Trump’s US policy towards China, this means that 2019 will be a nerve-racking year for Vietnam.

Vietnam has experienced an influx of foreign direct investment (FDI) by multinationals that has raised incomes and exports. Some of the FDI has resulted from firms relocating to Vietnam to avail of lower labour costs. Another important factor has been lower labour turnover compared to China.

Disruption to Chinese world trade could possibly increase the inflow of foreign firms to Vietnam, in the same way as Brexit may lead to higher FDI into Ireland. But, as in Ireland, there is a healthy debate now beginning in Vietnam on the challenges which heavy dependence on FDI brings to its economy.

At an economic conference in Hanoi late last year, jointly sponsored by Irish Aid, a number of Vietnamese economists asked what benefits, apart from the direct jobs involved, were brought by large multinationals such as Samsung (which employs 175,000 in Vietnam).

One answer, according to research by TCD’s Carol Newman, is that productivity has risen in those Vietnamese firms that trade with or supply the foreign multinationals based there. So FDI has had a spillover effect that benefits the wider economy.

Ireland has also experienced a productivity boost in domestic firms doing business with multinationals, according to findings by the ESRI. FDI firms set high standards for the firms that supply them and, in turn, those firms are more productive.

Another beneficial side effect of FDI that we have experienced in Ireland has been the strengthening of our management expertise. While, in the initial decades of FDI in Ireland, most of the top management of foreign firms had come from abroad, many of those running these global firms in Ireland today are Irish.

Many young Irish recruits, ,who joined these firms moved abroad, developed expertise and advanced their careers. Many subsequently returned to work in senior positions in Ireland, bringing home their skills and expertise, whether they remained in the multinational sector or worked for domestic firms.

However, this favourable outcome has taken decades to play out. In Vietnam’s case, it may, therefore, also take decades for this positive side-effect of FDI to be realised.

Vietnam is also particularly vulnerable to the effects of rising sea levels, with a lengthy low-lying coastline along which most of its population live. Pollution levels are also high in its cities.

Economic growth is likely to exacerbate carbon use and pollution, as a more affluent population invests in cars and in air conditioning. So, alongside its economic vulnerability, Vietnam is also at serious risk from global warming.