Agency that lured Apple, Google and other multinationals to Ireland faces challenges 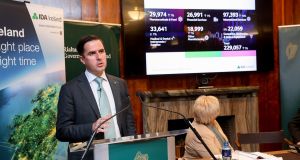 IDA Ireland CEO Martin Shanahan: acknowledges that a weakened global economy with a smaller pool of investment will make the agency’s task tougher

Depending on how you measure it, IDA Ireland turns 70 or 50 this year. The agency, responsible for attracting multinationals to the Republic, began as part of the old Department of Industry and Commerce in 1949 before becoming independent in 1969.

Whether the IDA is a septuagenarian or just middle-aged, the figures it published on Thursday appeared to give a youthful swagger. A record 230,000 people work for the companies that it has lured here.

They range from iPhone maker Apple to Chinese drug developer WuXi Biologics, from long-standing pharmaceutical giants such as Abbott to new-economy behemoth Google. Together these businesses contribute €19 billion a year to the economy.

The Republic continues to cut a far bigger slice of the multinational cake than its peers. IDA chief executive Martin Shanahan points out that in 2017, our share of job-creating investment into the EU was 5.4 per cent, while we accounted for 1.9 per cent of the bloc’s economy.

The IDA’s job is to go out, find those opportunities and win them

Nevertheless, Shanahan and his colleagues face a near-unique mix of challenges as they try to maintain this in the face of increased competition. Brexit looms on the horizon, and in the US, Ireland’s biggest source of foreign investment, the economy may be slowing.

Elsewhere, Shanahan warns that increasing nationalism, protectionism and the possibility of trade wars all threaten to slow globalisation. He acknowledges that a weakened global economy with a smaller pool of investment will make the agency’s task tougher.

“It is also true to say that in a contracting environment, there will also be opportunities. The IDA’s job is to go out, find those opportunities and win them. Does it mean that we’re going to have work harder for a larger share of a smaller pie? Possibly.”

In his statement, Shanahan highlights an old favourite for both his agency and most business groups: competitiveness. This includes tackling the shortage and high cost of homes, which have reached the point where they are worrying multinationals.

Shanahan notes that many companies already here chose to expand their businesses last year, despite being knowing “full well” that we have a housing shortage. He believes that this indicates they do not believe it is a long-term problem.

Birthdays apart, 2019 could be a watershed for the IDA, as its current five-year strategy ends and it draws up one for what could be a very dramatic half-decade to 2025.

It is early days for predicting what the next strategy will look like, but Shanahan says the IDA will focus on further diversifying both the markets and industries from which it seeks investment. The greater the spread of both, the more resilient we are to shocks, he explains.

The types of jobs that are being created are more sophisticated, higher-value jobs

What could be more significant is the growing influence of artificial intelligence and robotics that the IDA sees on its clients. Its chief executive says this is true of all businesses, not just technology companies.

“We can already see within our base of companies that the types of jobs that are being created are more sophisticated, higher-value jobs, and that there are less what might be regarded as routine jobs,” he says. “So I think that’s going to influence what we do. And then we’ll have to see how the world evolves as well.”