Volume of mortgage approvals fall in November on previous month

Mortgage activity improved in 12 months to November by 4.5 per cent 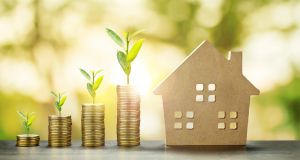 Figures from the BPFI show an average mortgage of €218,430 was approved in November. Photograph: iStock

The volume of mortgage approvals fell in November compared to the previous month with first-time buyers and movers receiving fewer offers of credit from lenders. The value of the mortgages approved also fell.

Data from the Banking and Payments Federation Ireland (BPFI) shows that approvals fell, bucking a trend in the previous two years whereby approvals rose in November. However, the BPFI cautioned about making assumptions on monthly data as it can be volatile.

In any event the 4,102 approvals, valued at €896 million, means activity increased by 4.5 per cent in volume terms compared to November 2017 and increased 3.3 per cent in value.

First-time buyers (FTBs) accounted for almost half of the value and volume of approvals with more than 1,900 mortgages approved with a value of €438 million. Mover purchasers, meanwhile, accounted for 27 per cent of the volume of mortgages.

“Overall the latest figures continue to confirm the predominance of FTBs in the mortgage market where they account for close to half of all approval activity,” said Felix O’Regan, BPFI’s director of public affairs.

There was significant growth in the remortgaging and switching sector of the market with 33 per cent more mortgage approvals in the 12-month period.

The figures show an average mortgage of €218,430 was approved in the month, slightly higher than the previous month. However, that figure is down on the May 2018 high of €226,622 – the largest average figure since the BPFI started releasing data in 2011.

In the 12 months to the end of November there were almost 45,500 mortgage approvals valued at more than €10 billion across a raft of lenders active in the Irish market including AIB, Bank of Ireland, Permanent TSB and Ulster Bank Ireland.

The BPFI represents more than 70 institutions in the financial industry in Ireland. The group reports mortgage approval figures on a monthly basis using data supplied by lending institutions.

‘I don’t need to do any of this. . .I don’t actually need to work.’ 15:30
Farm safety equipment to benefit from improved capital allowances 14:14
Ireland wants €100bn in trade with Asia-Pacific region by 2025, says Martin 14:00
Topshop owner fights for surivival putting Irish jobs at risk 13:51
Same Brexit stumbling blocks persist as Barnier travels to London 13:08