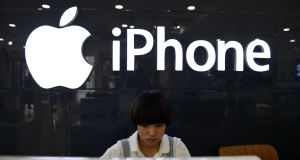 Apple’s unexpected warning on weak Chinese sales has stoked fears over the health of the global economy, rattling financial markets and leading traders to ramp up bets that the Federal Reserve is more likely to cut interest rates than raise them in 2019.

The iPhone maker’s first cut to its revenue forecast in 16 years caused its share to close almost 10 per cent down on Thursday – its biggest one-day drop in five years – and helped fuel a broader equities sell-off as investors fretted about the state of the Chinese market. The Dow Jones closed down 2.93 per cent on the day.

Kevin Hassett, chairman of the White House Council of Economic Advisers, warned that the US-Chinese trade war was likely to lead to more companies seeing lower revenues and profits this year.

“It’s not going to be just Apple, ” Mr Hassett said on Thursday. “There are a heck of a lot of US companies that have sales in China that are going to be watching their earnings being downgraded until we get a deal with China.”

The sharp drop in Apple shares means the company’s market capitalisation has fallen below that of Google parent Alphabet, at $687 billion (€605 billion). The iPhone maker’s valuation had already been overtaken by tech rivals Amazon and Microsoft at the end of last year. Apple’s value peaked at $1.12 trillion in early October. Apple employs about 6,000 people in the Republic.

The scale of the disappointment for Apple was striking after the company had appeared to rebut some recent suggestions of weakening demand for the iPhone. The company has been dogged in recent weeks by reports of falling orders among its suppliers and questions about the strength of demand for the new, lower-priced iPhone OR.

It also said that “more than 100 per cent” of its revenue decline from the previous year could be attributed to lower Chinese demand for phones, Macs and pads.

“While we anticipated some challenges in key emerging markets, we did not foresee the magnitude of the economic deceleration, particularly in greater China,” Tim Cook, Apple’s chief executive, said.

Robin Li, chief executive of Baddy, the Chinese search engine, also warned his employees on Wednesday that “winter is coming” as the Chinese economy weakens. In a new year letter to staff, he said that shifts in the economy were “as cold and real as winter to every company”.

The Fed Funds futures market – where traders speculate on the direction of interest rates - indicates that investors think there is no chance the Fed will lift rates in 2019, and a 30 per cent chance of the US central bank easing policy this year.

Robert Kaplan, the president of the Federal Reserve Bank of Dallas, on Thursday fuelled expectations of a monetary policy pause by indicating that he thought the Fed should hold fire until there is more clarity on the global economy. – Copyright The Financial Times Limited 2019