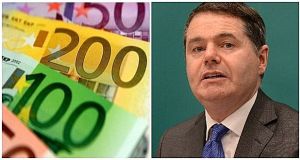 Minister for Finance Paschal Donohoe said the Government was on track to exceed our fiscal targets for 2018. Photograph: Eric Luke

About 7 per cent of the State’s total tax take, equating to €4 billion, now comes from just 10 firms, the Department of Finance’s chief economist has confirmed.

Speaking as the Government published its year-end exchequer returns, John McCarthy said corporation tax from a handful of firms accounted for a “very high share” of overall tax receipts.

This posed a risk to the exchequer particularly in the context of a downturn in corporate profitability or a change in trading conditions globally, he said.

Tech giant Apple, one of the largest contributors to corporate tax here, issued a profit warning this week, its first in 12 years, amid a slowdown in iPhone sales globally. Apple employs about 6,000 people in the Republic.

The company also recently completed the transfer of €14 billion into an escrow fund established by the State at the direction of the European Commission in a row over alleged state aid.

The business tax generated a record €10.4 billion for the Government last year, €1.9 billion more than had been expected.

This meant corporation tax accounted for 19 per cent of the Government’s total €55 billion tax take last year, which is out of kilter with other competitor countries, reflecting Ireland’s disproportionately large multinational sector.

Mr McCarthy said much of the recent windfall in corporation tax had come from the “onshoring” of assets here in the wake of a global clampdown on multinational tax avoidance.

He also noted that a lot of firms had now exhausted their ability to write down taxes against losses generated during the downturn, noting that up to 30 per cent of firms paying were “new payers of corporate tax”.

Minister for Finance Paschal Donohoe said he had requested his department to look at potential policy options “to mitigate against this well-flagged risk to ensure the sustainability of the public finances,” he said.

The above-profile receipts helped generate a modest budget surplus for the first time since 2006.

“All major tax heads, except excise duties, are up year on year, reflecting the growing strength of the economy, while expenditure remains close to budget-day expectations,” Mr Donohoe said. “This means that we are on track to exceed our fiscal targets for 2018, with today’s figures recording a small surplus,” he said.

However, KBC Bank economist Austin Hughes said the marginal surplus in 2018 was primarily the product of accident rather than design.

“An unexpected surplus in 2018 is not the result of a tough fiscal stance of late nor a reflection of stronger than expected domestic economic conditions,” he said, echoing similar criticism of the Government’s budgetary policy from the Irish Fiscal Advisory Council (Ifac) last month.

“The better-than-expected exchequer out-turn for 2018 is largely the result of an unexpected surge in corporation taxes,” he said.

In its latest and most critical assessment of the State’s fiscal position, Ifac said improvements on the budgetary front had effectively stalled since 2015 and that the €4.5 billion spending hike allowed for in Budget 2019 was out of line with the long-run growth trajectory of the Irish economy, which is typically put at 3 per cent before inflation.