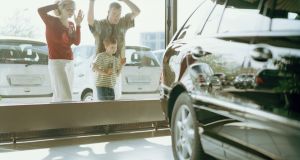 A total of 125,557 new passenger cars were registered in 2018, with Volkswagen the best-selling brand, recording 13,775 new sales, ahead of Toyota on 12,037, according to figures from the Society of the Irish Motor Industry

Brexit’s impact on sterling has been blamed for the 4.4 per cent fall in new car sales in 2018, as used imported arriving from the UK exceeded 100,000 for the first time.

A total of 125,557 new passenger cars were registered in 2018, with Volkswagen the best-selling brand, recording 13,775 new sales, ahead of Toyota on 12,037, according to figures from the Society of the Irish Motor Industry.

According to SIMI director general designate, Brian Cooke the drop in new car registrations is largely a result of Brexit and the associated weakness of sterling. “This has led to a surge in used car imports over the last two years, and 2018 saw used imports surpass the 100,000 mark for the first time.”

In total 100,755 used imports were re-registered in the Republic, with the majority of vehicles between three and five years of age. However, there was a significant growth in the number of one year old used imports registered here last year. The most popular used import brands were VW, Ford, Audi and BMW.

According to Cooke: “For consumers looking at the used car market, whether an Irish car or a used import, SIMI’s advice is to shop around and consider the real benefits of shopping in your local retailer, who not only provides value to the customer but also encourages economic activity locally.”

Hyundai Ireland managing director Stephen Gleeson said  uncertainty over Brexit makes the new car market in 2019 very difficult to predict. However, the Korean brand is working on the basis that sales will be largely in line with last year. He said a hard Brexit may result in the introduction of tariffs and VAT on used imports. That could dramatically reduce the number of used imports coming in, and as a result increase the value of the current fleet of used Irish cars. That in turn would reduce the cost of change for buyers considering a new car, which could help cushion the motor trade from the wider economic impact of a hard Brexit.

A spokeswoman for Toyota Ireland said the company expects the new car market this year will be down on 2018, with Brexit driving causing consumer uncertainty. “Like many others we’re still waiting on clarity on Brexit and hopefully a ‘no deal’ scenario can be avoided,” she said. The Japanese brand has benefitted from the increased interest in alternatives to diesel and and predicts 80 per cent of its sales this year will be petrol-electric hybrid models, with hybrids accounting for 9 per cent of the market in 2019.

Despite on the ongoing political focus on harmful emissions from diesel engines, it remains the engine of choice for the majority of new car buyers, making up 54.4 per cent of the all new sales, ahead of petrol on 38.5 per cent. However, its share has slipped from 65.2 per cent of the market in 2017. Electric car sales nearly doubled last year, with 1,233 new registrations. The growth in hybrids continued with nearly 7,000 new registrations, an increase of 56 per cent on the previous year.

Irish buyers still love SUVs it seems, with the best-selling model remains the Hyundai Tucson crossover SUV with 4,026 registrations, just 24 cars ahead of the Nissan Qashqai.

At the commercial end of the market - traditionally a bellwether for wider national economic activity - vans and light commercial vehicle sales were up 5.6 per cent at 25,561 for the year. Ford held the lead with 6,120 sales, followed by Volkswagen with 4,893. Sales of heavy goods vehicles remained relatively static, however, with 2,590 registrations during the year, down 13 trucks on 2017.