Social Media Summit to kick off at Croke Park

Business Week: Tesco likely to give details on proposed €4bn merger with Booker 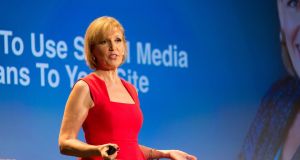 Mari Smith, “the queen of Facebook”, is among the speakers for the Social Media Summit which begins on Tuesday at Croke Park

If you’ve noticed anyone wandering around the office while peering through a video camera of smartphone lately, it may have something to do with the latest trend (possibly fad) in social media.

While still considered in its infancy – arguably like social media itself – video is increasingly being adopted by businesses and brands to connect with target markets and consumers. It is one of many aspects of the digital world due to be considered, discussed and yes, videoed, at the Social Media Summit 2017 which starts on Tuesday.

“Many organisations have yet to integrate it into their marketing communications – ultimately not being proactive in preparing a live video strategy or goal for how they want their business to dominate live video over the coming years,” organisers noted ahead of this year’s event.

Attendees will get the chance to explore how to develop live video strategy and learn how to enhance the production quality of their live stream.

If it’s all too much to resist tweeting about, then other speakers of interest will probably include Mari Smith, “the queen of Facebook” and authority on its marketing and social media, as well as those who help finely tune the image of Airbnb, Littlewoods, Paddy Power Betfair, Twitter and more.

Tesco is expected to give a little bit more detail on its proposed merger with Booker when it publishes its results on Wednesday.

The €4.35 billion deal was announced last January but, with the company entering a closed period, details have been sketchy. In the meantime, a number of shareholders have raised concerns, notably about the price.

The company’s results could well be used to drag further information into the reporting limelight and fend off some of the doubts surrounding the marriage of the UK’s largest supermarket to its largest cash and carry wholesale supplier “ultimately to try and calm the waters”, says Aidan Donnelly, head of equities and private clients at Davy, adding that the merger still requires Competition & Markets Authority (CMA) approval.

Otherwise, things are expected to go well for Tesco with analysts foreseeing reasonable numbers following a year of like-for-like growth.

Donnelly says management change in the last two years has delivered improvements, notably in online shopping and through Tesco Express outlets, both of which are free of competition from discounters.

“It’s like trying to turn a super tanker,” he says, selecting an appropriate metaphor for the supermarket giant. “I think it shows a management that has been playing defence for the last two years and now ultimately wants to switch that to a more offensive tack.”