Practical and cost effective, it allows for the easy authentication of any ID 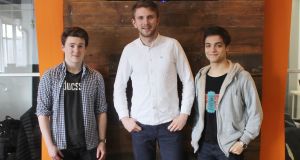 Eureka moments that lead to new business ideas can happen anytime, anywhere. Finn Murphy, co-founder of Saastart-up start-up, iDly Systems, had his when he lost his student card.

“When getting my card replaced I noticed the printers were plugged in by USB. I figured that all the information on the card existed in a digital form somewhere and that the printer was just putting it on a piece of plastic,” he says. “I immediately thought why not replace the printer with some software and the plastic card with a mobile app? I pitched the idea to the provost of Trinity College who liked it and the college funded the pilot that got us off the ground.”

Murphy’s co-founders in the business are college friends Dário Tavares Antunes and Patrick O’Boyle, both computer graduates. Murphy’s background is engineering. The business was established in April 2016.

“For organisations we’re offering a solution whereby IDs can be verified simply and more cost effectively than issuing traditional plastic cards. For individual users we’re aggregating all of their ID cards on one simple platform,” Murphy says. “Right now, people carry most of their IDs in their wallet. There’s no reason why a parallel shouldn’t exist in a digital world, on their phones.”

There are two parts to iDly’s service: a business facing web portal and a user facing mobile app. Businesses will pay per card issued and in time users may pay in-app to renew certain cards. The system is already up and running in the founders’ alma mater and will be adopted by UCC shortly. It is also being used by the Irish Kidney Association to create a digital organ donor card.

Murphy acknowledges that iDly is not the first company to think about digital IDs. However, he says his company’s spin on the idea is different. “We’re not going after digital driver’s licences or digital passports as we’re too small to compete in that space. Nor are we trying to compete against Apple Wallet in the frequent use credentials space for things like boarding passes and cinema tickets,” he says. “Our aim is to carve out a niche targeting mid-range IDs/ credentials that might not get very frequent use, but are still a necessity and cost the organisations issuing them a lot for very little return.”

Murphy believes his company’s service has the potential for “vast disruption across many different industries” not least because in addition to being practical and cost effective, it allows for the easy authentication of any ID. “Take someone renovating your home,” he says. “They show you their credentials and insurance certification and you trust that the physical documents presented are accurate. But you don’t have an easy way to verify it. This problem exists across the world and across all sectors, particularly as Photoshop and high quality printing and scanning technology becomes cheaper.

“With iDly every user gets a verify feature that allows them to check that anyone else’s ID on the platform is valid and real. We do this by letting every ID generate a private encryption key and embed it in a QR (quick response) code – a square barcode on a screen, just like on a boarding pass. The other user (in this case the householder) reads the QR and generates a verification proof validating the credential. Our system can be used to generate any document that requires verification and any user with the app can verify it.”

The iDly team now stands at four people with two more positions due to come on stream soon. The product is currently in beta testing. To date a little under €100,000 has been invested between seed funding from Trinity College, personal resources and support from Enterprise Ireland’s competitive start fund. The company plans to raise around €500,000 in late summer to accelerate its growth and build out its business development team.