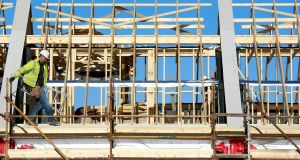 Just 2 per cent of the 1.7 million occupied homes in the State were built in the last five years, according to the latest census data, reflecting the near-complete collapse in construction after the crash.

This compares to 431,763 dwellings built between 2001 and 2011, which account for a quarter of the State’s entire housing stock.

The fall-off in housing supply since 2010 has resulted in an acute housing and homelessness crisis across Ireland.

The census numbers show there were only 5,700 flats and apartments in purpose built blocks added in the Dublin City area, the most built up area in the capital, during the five-year period, bringing the total to 60,349.

Two recent reports, from property websites MyHome.ie and Daft.ie, blamed an acceleration in property prices this year on the lack of supply.

While the Government’s housing strategy is centred on scaling up supply to around 25,000 units a year, some experts believe demand may already exceed 40,000.

The census figures show there was an increase of 48,257 housing units (2.9 per cent ) during the period, while most of this figure is comprised new builds, a certain portion reflects formerly vacant dwellings becoming occupied.

The percentage of occupied housing units in Dublin City that were flats or apartments was now put at 34 per cent.

Detached houses comprised 42.1 per cent of the total housing stock (715,133 dwellings) and remained the most popular dwelling type, increasing by 15,264 during the period. Semi-detached dwellings increased by 15,297 (3.3 per cent) and accounted for 471,948 dwellings.

Looking at owner-occupied households in more detail it can be seen that the number of households that owned their home with a mortgage or loan decreased by 47,473 (8.1 per cent).

Conversely, the number households that owned their home outright increased by 45,101 (8 per cent).

Since 2011, the average weekly rent paid across the country grew by 14.8 per cent to €156 while households living in private rented purpose built flats and apartments paid the highest rent at an average of €229 per week.