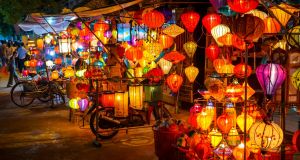 Growth in China, the world’s second largest economy, continues to moderate as the government implements measures to move the economy towards a more consumption-driven model. Photograph: iStock

The rebalancing of China’s economy and policy uncertainty in advanced economies means developing Asia could record its slowest annual growth in 16 years, the Manila-based Asian Development Bank said in its annual outlook.

Developing Asia, which comprises 45 countries in the Asia Pacific, will expand 5.7 per cent in 2017 and 2018, a slight deceleration from the 5.8 per cent posted in 2016, according to the ADB’s latest Asian Development Outlook, released on Thursday.

The forecast by the bank is the weakest for the region since it grew 5 per cent in 2001.

The region remains the largest single contributor to global growth, at 60 per cent, the report shows. Growth is recorded as picking up in two-thirds of economies in developing Asia, supported by higher external demand, rebounding global commodity prices, and domestic reforms.

While uncertain policy changes in advanced economies do pose a risk to the outlook, we feel that most economies are well positioned to weather potential short-term shocks

“Developing Asia continues to drive the global economy even as the region adjusts to a more consumption-driven economy in the People’s Republic of China and looming global risks,” said Yasuyuki Sawada, the ADB’s chief economist.

“While uncertain policy changes in advanced economies do pose a risk to the outlook, we feel that most economies are well positioned to weather potential short-term shocks,” said Sawada.

Growth in China, the world’s second largest economy, continues to moderate as the government implements measures to move the economy towards a more consumption-driven model.

Overall output is expected to slow to 6.5 per cent in 2017 and 6.2 per cent in 2018, down from 2016’s 6.7 per cent. Efforts to maintain financial and fiscal stability will continue to be a modest drag on growth going forward, but continued structural reform will help to maintain growth in the government’s target range.

Commodity producers such as Malaysia, Vietnam, and Indonesia will be boosted in particularly by the recovery of global food and fuel prices.

“The impact of the demonetisation of high-value banknotes is dissipating as the replacement banknotes enter circulation. Stronger consumption and fiscal reforms are also expected to improve business confidence and investment prospects in the country,” the report said.

Overall growth in Southeast Asia is expected to accelerate further with nearly all economies in the region showing an upward trend, the report said. The region will grow 4.8 per cent in 2017 and 5 per cent in 2018, from the 4.7 per cent posted last year.

The Fed hiked US rates a notch in mid-March, its second tightening in three months, and the ADB said higher US interest rates were a risk to the forecast, as they will accelerate capital outflows, while rising household debt in some Asian economies was also a growing risk.

Industrial economies are gathering growth momentum, with the US, euro area, and Japan expected to collectively grow by 1.9 per cent in 2017 and 2018.

1 Covid-19 has shown that much of ‘normal’ life should have been binned years ago
2 Cabinet to agree on implementing EU travel plan
3 Banks urge borrowers facing hit from new restrictions to engage
4 Banks are right to charge interest on mortgages with Covid payment breaks
5 Budget 2021 main points: Up to €5,000 a week for Covid-hit firms, hospitality VAT rate cut
6 CFOs in the dark on data rules despite approving investments
7 Johnny Ronan loses out in court battle on 13-storey docklands plan
8 Quizzes, karaoke, meditation: The best online resources for self-isolation
9 Canadian firm repays investors 50% on Irish wind assets
10 Patrick Guilbaud: Covid pandemic ‘worse than war’ for restaurants
Real news has value SUBSCRIBE