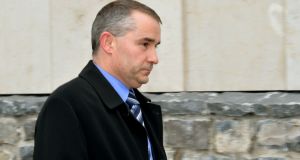 QIH chief executive, Liam McCaffrey: says the group drove down costs even as employee numbers rose from 721 to 756 during the year. Photograph: David Sleator

Quinn Industrial Holdings (QIH), the group that took over certain manufacturing operations of the former Quinn Group, posted a 62 per cent jump in profits in 2016 even as management at the company dealt with incidents of alleged sabotage and threats during the year.

However, revenue decreased by 4 per cent during the year to €194.5 million as a result of a 11 per cent slump in the value of sterling against the euro in the wake of the Brexit referendum.

The results are the second set of 12-month figures since businessmen John McCartin, John Bosco O’Hagan and Ernie Fisher led a buyout of the QIH businesses in 2014, backed by a group of US hedge funds, Brigade Capital, Contrarian Capital and Silver Point Capital.

Seán Quinn, the founder of the Quinn cement-to-insurance empire which imploded after his family lost billions of euro in a failed financial bet on Anglo Irish Bank shares, left the company in May last year, a year after he was hired as a consultant. Relations between the parties had become strained before he exited the business for a second time.

“In 2015, the significant underlying growth at the time was from export sales and sales to the UK, whereas [in 2016], while we were strong in the UK, we also saw a pick-up in Ireland, ” Liam McCaffrey, chief executive of QIH told The Irish Times, adding that the company also drove down costs even as employee numbers rose from 721 to 756 during the year.

The management of QIH has faced alleged incidents of death threats and damage to assets in the past year. A pig’s head was left outside the home of a senior member of the company as part of an alleged campaign of intimidation, which has been the subject of Garda investigations.

The Quinn family has condemned the alleged acts of intimidation and “negative activity in the local area” along the Cavan-Fermanagh border.

“The last major incident was in August of last year and it has largely receded,” said Mr McCaffrey on Thursday.

“The type of support for anybody carrying out that sort of activity has receded. We’re growing employment. These sorts of things provide a very healthy backdrop and a much more productive environment.”

However, he said that the UK’s planned exit from the European Union presents “challenges” for the company as its main operations straddle the Border.. While Mr McCarthy said that the company “always keep an eye out” for acquisition opportunities, “we haven’t seen anything cheap for sale” as a result of Brexit.

Meanwhile, QIH’s chief financial officer, Dara O’Reilly, said the current year has “commenced positively” with sales revenue and volumes increasing year-on-year in the first quarter for both of the group’s divisions.

The company, which has over €100 million of debt, invested €11.5 million last year, mainly in its packaging business. Mr O’Reilly said the group expects capital expenditure to be over €10 million this year, with the focus mainly on the construction industry supply unit.

Mr McCaffrey says he has no visibility on when and how the hedge fund backers will ultimately exit their investment.

“They’re supportive of a long-term growth strategy and all the surplus cash has been invested [to date],” he said.