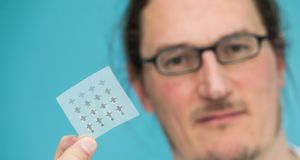 Prof Jonathan Coleman, principal investigator at Amber with one of his printed transistors 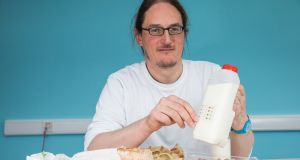 Prof Jonathan Coleman, principal investigator at Amber and a professor in the School of Physics at TCD, is working on turning common products into intelligent devices that can communicate information to consumers

Ever wished your milk could warn you by text message that it was about to go off? It may soon be possible thanks to Dublin researchers who have found a way to turn everyday products into smart devices that can communicate with you.

Researchers at the Science Foundation Ireland-funded Amber Centre, based in Trinity College, have fabricated printed transistors, a breakthrough which is expected to unlock the possibility of turning common products into intelligent devices.

Among the possibilities are wine labels that alert you when a bottle is at its optimum temperature, food packaging that warns of sell-by-dates, and window panes that provide the day’s weather forecast.

Prof Jonathan Coleman, principal investigator at Amber, led the team of researchers whose findings have been published in the latest issue of the leading international journal Science.

The aim of Prof Coleman’s research is to take liquid dispersions of nanosheets and, by carefully tuning the liquid properties, optimise them for use as inks.

“Electronics has been around for donkey’s years and Intel out in Leixlip are among those making high-end, high performing transistors. However, unlike them we are trying to make transistors so cheaply that they could be used in pretty much anything,” Prof Coleman told The Irish Times.

He said that as a result of his team’s latest research, printed devices could soon be incorporated into even the most mundane objects allowing products to gather, process, display and transmit information that could be of benefit to consumers.

“All of this is a long way off in the future, but it is imaginable that at some point milk cartons could send messages to your phone warning that the milk is about to reach its sell-by-date,” said Prof Coleman.

A number of Prof Coleman’s patents have already been licensed to well-known companies, including Samsung.

“We were able to print the initial transistors from a standard inkjet printer . . . we now intend to try to make more sophisticated printed transistors,” he added.