Warren Buffett was too American to see through Kraft 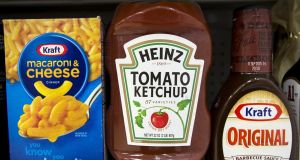 Up to 98 per cent of Kraft’s sales before the merger with Heinz were in North America.

Warren Buffett never bets against the US, the country where he built his fortune. “The record of American business has been extraordinary. . .We are lucky - gloriously lucky - to have that force at our back,” he wrote in his annual letter to Berkshire Hathaway shareholders on Saturday.

He should have been less patriotic about Kraft, the processed food group that makes staples such as Kraft Macaroni & Cheese and Velveeta, a bright yellow “processed cheese product”.

The merger that he engineered between Heinz and Kraft in 2015 has turned out very badly: Heinz paid too much for an indigestible bunch of ageing brands in the wrong country.

The $15.4 billion (€13.5 billion) impairment of Kraft Heinz assets that contributed to a plunge in its share price on Friday can be put down to various causes - cost-cutting by 3G, the private equity group that manages it, discounting by supermarkets, and changing tastes among millennials. But there is a simpler explanation: 98 per cent of Kraft’s sales before the merger were in North America.

Were he less parochial, he might have seen Kraft Heinz’s downfall coming.

It would be anathema to Mr Buffett to admit it. Not only has he always been a staunch believer in US enterprise and “our country’s almost unbelievable prosperity”, but he embodies 20th-century consumerism. His habitual drink is Cherry Coke (Berkshire holds a 9.4 per cent stake in Coca-Cola) and he picks up breakfast each day at a McDonald’s in Omaha, Nebraska.

Were he less parochial, he might have seen Kraft Heinz’s downfall coming. He noted on Monday how sales of the Kirkland Signature private label brand owned by Costco, the US discount warehouse club, had overtaken all of the Kraft Heinz brands put together. The old trick - advertising brands heavily and pushing them on to supermarket shelves - was failing.

In other words, what he calls the “moat” around US packaged food brands has been crossed. As he wrote in his 2007 annual letter, he has always avoided investing in “companies in industries prone to rapid and continuous change” in favour of those with “superiorities. . . that make life difficult for their competitors”. These were either low-cost providers or companies with “a powerful worldwide brand”.

The consumer moat was first crossed in Europe, where supermarkets have cultivated their own brands for longer, and discounters such as Aldi and Lidl have shown that consumers will avoid paying a premium for staples. Kirkland Signature’s annual sales of $39 billion are old news in Europe, with private labels holding more than 40 per cent of the market in the UK and Germany.

When Kraft’s snack brands such as Cadbury and Oreo were demerged into Mondelez International in 2012, Kraft was left with history. The theory was that Heinz could push Kraft’s brands overseas, but there is little hunger for American concoctions such as Cheez Whiz, nor thirst for Kool-Aid, the brand of flavoured soda powders invented in Mr Buffett’s home state in 1927.

This was compounded by the cost-cutting zeal of 3G, Mr Buffett’s unlikely partner at Kraft Heinz. Mr Buffett this week defended its mantra of raising margins rather than investing in growth, saying that innovation and marketing were unaffected by zero-based budgeting. But there was collateral damage - 3G has admitted as much by putting $300 million into innovation.

It turns out to have more in common with Europe than he realised: advertising flavoured with history is no longer enough.

Decades of pursuing convenience and reliability, rather than health and organic ingredients, leave Kraft Heinz with a credibility gap when it turns to wooing the new generation. Its announcement in January that “Kraft Natural Cheese is now made with milk from cows raised without the artificial growth hormone rbST” invites the question of what “natural” meant before.

Neither as eater nor investor has Mr Buffett much appetite for millennial brands. “If you think about it, people do not change their habits that much. . .There are very few billion-dollar brands that have been created in food,” he told CNBC. He prefers the old ones, citing their bargaining power over the grocery store founded by his great-grandfather in 1869.

But every brand starts small - Ben & Jerry’s ice cream was founded in 1978 before outgrowing its craft roots and being acquired by Unilever in 2000. The most troubling development for Mr Buffett is that retailers have adapted to consumers better than Kraft Heinz. The Simple Truth organic brand created by the US supermarket chain Kroger passed $2 billion in annual sales in 2017.

This has daunting implications for his attachment to US food and drink brands. Low cost retailers such as Costco and Walmart still have moats similar to the one around Geico, Berkshire Hathaway’s retail insurer. They can sell their own staples, competing with Kraft Heinz and others, and cutting the price premium they enjoyed.

It also shows that his fondness for the US reached a limit with the Kraft Heinz deal. The notion that Kraft’s quaint products could be given the 3G treatment yet manage to grow relied on the country remaining a retail world unto itself. It turns out to have more in common with Europe than he realised: advertising flavoured with history is no longer enough. – Copyright The Financial Times Limited 2019