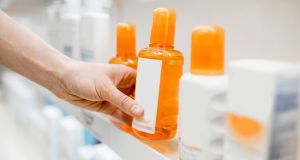 Sales of sun cream have plunged by 66 per cent this summer as shoppers were confined to staycation. Photograph: iStock

Sales of sun cream have plunged by 66 per cent this summer as shoppers were confined to staycation, according to figures from grocery market analyst Kantar. Restrictions on social gatherings have seen deodorant sales fall 15 per cent.

Data for the 12 weeks to July 12th shows the change in habits wrought by the Covid-19 pandemic, including increasing sales of alcohol in supermarkets. Sales of alcohol jumped by three-quarters in the period as consumers were prevented from attending pubs and restaurants.

Growth in grocery sales, which have been a feature of the pandemic lockdown, continued although there are signs that shoppers are beginning to return to pre-lockdown behaviour, Kantar said. Sales were still 23.2 per cent ahead of the the same period last year.

Over the three months to July 12th, an additional €577.7 million has passed through the tills of grocery retailers

Emer Healy, a retail analyst at Kantar, noted that the survey showed sales growth had slowed over the last four weeks as some shoppers “started to spend less on food for their fridge and more on eating and drinks out”.

Some trends have yet to be reversed. Sales of savoury snacks and confectionery were 45 per cent and 35 per cent up on the comparable period in 2019 respectively. And brands remained more popular than own-label alternatives, with an additional €345 million spent on household names in the three month period.

Aldi was the major beneficiary of the run on branded goods, Kantar said. Its branded sales rose by more than half, helping the retailer grow by 20.9 per cent year on year.

“An additional 75,000 shoppers purchased groceries online over the past 12 weeks, contributing €38.9 million to the channel,” Ms Healy noted.

SuperValu claimed the biggest market share of 22.4 per cent for the fourth month in a row after sales rose 30.9 per cent. Sales in Tesco grew 20.7 per cent year on year, giving in a 21.1 per cent share in the market, while Dunnes Stores had growth of 14.6 per cent and market share of 20.3 per cent.