Some €10m has been invested in Portlaoise plaza in Co Laois, which will create 120 jobs 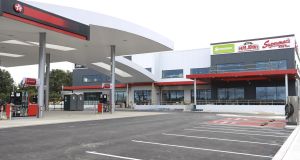 The Portlaoise plaza which will open off junction 17 on the M7. Photograph: Alf Harvey

Pat McDonagh’s Plaza Group will open its seventh motorway service station this week, creating 120 new jobs at its facility in Portlaoise, Co Laois, after an investment of €10 million.

The Portlaoise plaza, controlled by Supermac’s founder Pat McDonagh, will be the largest of the group’s motorway service stations, which includes the Barack Obama plaza, and stations in Kinnegad, Co Westmeath, and Mallow, Co Cork.

The Portlaoise facility, located off junction 17 on the M7 motorway, was originally due to open in May, but was delayed as a result of the Covid-19 pandemic.

“Many customers have expressed great anticipation and we’ve employed a lot of local staff, which is a real boost for the area,” said Mr McDonagh, who founded Supermac’s in Ballinasloe, Co Galway, in 1978.

As with its other premises, the Portlaoise plaza will include a Supermac’s fast food outlet, a Papa John’s Pizza, a deli, and an extensive coffee offering.

Mr McDonagh’s business empire – which in 2018 recorded profits of €23.7 million on sales of €172 million – now includes the seven plazas, six hotels under the Só Hotel brand, and 108 Supermac’s outlets. The group employs more than 4,000 staff.

Approval for the Portlaoise plaza was given by Bord Pleanála in July of last year. It had been appealed to the planning board by Petrogas, the parent group of service station operator Applegreen, which has permission for a filling station and shop on the opposite side of the M7.

Mr McDonagh’s new plaza will have a two-storey building and drive-thru facility, with parking for 144 cars, 20 HGVs and 10 coaches.

Minister of State for Finance Seán Fleming said the jobs were a timely boost for the region. “Pat and Una McDonagh are now one of the biggest employers in the county,” he said, adding that it was “encouraging to see that jobs are being created to this extent despite the difficult circumstances”.