It is going to be a long road back for retailers on the street after the pandemic, and the way ahead looks no easier for the landlords 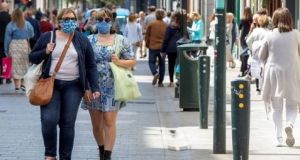 Irish Life owns about a dozen properties on or close to Grafton Street, several of which now lie empty

It just keeps getting worse for Dublin’s Grafton Street. The effects of the pandemic have dramatically accelerated a trend of closures that started late last year. It may yet cause major problems for some of the big property investment funds that own multiple properties on the street.

This week’s casualty list is headed by giftwares retailer House of Ireland at Number 114, which on Wednesday decided to close permanently after initially shutting for lockdown in March. Retailers in its tourist segment of the market have been hammered.

On Thursday, the parent of Compu B, which has an outlet next door, went into examinership and its future is now uncertain.

Last week staff at the iconic Bewley’s cafe on the street got their redundancy papers.

Other recent casualties have included Cath Kidson, Monsoon, Urban Decay and Topman. There are boarded up or shuttered shops all over the street, and it isn’t because of a lockdown.

The UK “high street” has been laid low in recent months with a wave of closures. With British high-profile retailers prominent on Grafton Street, the ripples effects are sure to keep washing over Dublin’s premier shopping street for the rest of the year.

Lingerie retailer Victoria’s Secret, which opened on the street in December 2017 at a rent of €1.85 million, must now be kicking itself.

The institutional investor Irish Life must also now be regretting not doing a deal in January with shoe shop Ecco, which decided to close its Grafton Street store in January after a dispute over a rent increase with the insurance group.

Irish Life owns about a dozen properties on or close to Grafton Street, several of which now lie empty. It is going to be a long road back for retailers on the street after the pandemic.

The way ahead looks no easier for landlords, who may have to start doing deals to prevent further closures.