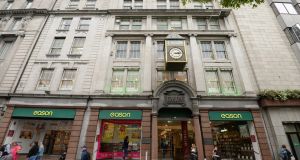 Eason has felt the impact of Covid-19 in a number of different ways since lockdown restrictions were introduced in March.

It was the final nail in the coffin of its Northern Ireland business, which had been struggling for years. The Irish-owned retailer has decided not to reopen any of its seven stores there, with 144 employees set to lose their jobs. Another 150 roles have gone in the Republic as Eason seeks to trim its costs by 30 per cent.

The pandemic has also slowed the sale of three remaining properties in its portfolio, part of a wider plan agreed in early 2019 to redistribute €60 million cash to shareholders.

These properties (including its flagship branch on O’Connell Street) were to have fetched about €40 million between them this year – to add to the €20 million pot from the sale of other buildings. A question mark now hangs over the timing of the sales and, more crucially, the sums that might accrue from the disposals.

More strategically, Covid-19 accelerated the switch to online trading, something that Eason has been grappling with for years.

The near three-month shutdown of the stores forced Eason to pivot swiftly to ecommerce. And it yielded some success, with the retailer selling €4 million worth of books online between March and June. That was about 80 per cent of the book sales it achieved across its chain of stores in the same period of 2019.

Overall, ecommerce sales have risen by 170 per cent year to date, with Covid helping to prove the concept, so to speak, for the venerable retailer.

Eason remains committed to its retail network across the State and there’s no suggestion that it will necessarily slim down its network of shops. But the stores might occupy less floorspace and focus more and more on selling on books rather than the many other items it offers. Being a pure bookseller was one of the attractions of acquiring rival Dubray.

Down the road, it’s not hard to imagine that Eason might only trade books off one floor in its O’Connell Street branch, with the others operating as concessions or under some sort of licensing agreement.

More immediately, the focus is on maximising returns from the back to school and Christmas periods, which make up the vast bulk of its annual revenues. It could prove to be an important chapter in the long history of Eason.