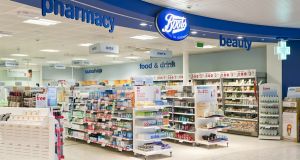 Boots Ireland has 87 stores in the country, and employed just over 1,600 people as of the end of August. That figure has now risen to more than 2,000 across 89 stores.

Revenue at Boots Ireland rose 3.5 per cent in 2019, while profit rose more than 11 per cent compared with the previous year, new accounts for the company show.

Boots paid €3.4 million in tax, according to the accounts.

Profit margin increased by 5.7 per cent year on year as the company improved its product range and promotions, controlled costs and developed new products.

Boots Ireland has 87 stores in the country, and employed just over 1,600 people as of the end of August. That figure has now risen to more than 2,000 across 89 stores.

The parent company announced earlier in July that it would cut 4,000 staff, restructuring its head office and closing 48 Boots Opticians stores. Its Republic of Ireland store will not be affected by the move, though it is expected that staff will be cut in Northern Ireland.

The move followed the parent company’s swung to a loss in the third quarter of the current financial year, as the Covid-19 crisis further weighed on its trouble-laden Boots UK division, leading to a $2 billion non-cash impairment charge. It also suspended share buybacks.