US shops now in the front line of war over masks 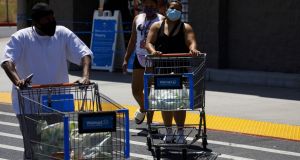 US retail executives are at odds over guidelines requiring customers to wear masks in stores, raising the question of whether store employees should bear the brunt of enforcing public health measures in the absence of a uniform federal policy.

Richard Johnson, Foot Locker chief executive, said that after having several conversations with peer executives in recent days, the sportswear chain would not require customers to wear masks at its hundreds of US stores.

The Foot Locker policy stands in contrast with rules announced by Walmart, Kroger and other large chains this week.

“Masks have become a political issue, not a health issue. I’m not willing to put my [employees] at risk” of having to defend a mandatory mask policy, Mr Johnson said.

Mr Johnson said he was troubled by accounts from other retailers of incidents, in which store employees have been injured while attempting to enforce mask policy among shoppers. “It’s been a really heated debate among retailers and retail CEOs,” he added.

At McDonald’s, 44 per cent of employees have been “physically or verbally threatened or abused by customers” when those customers were confronted for not wearing a mask or social distancing, according to a nationwide poll conducted by the Service Employees International Union.

McDonald’s took issue with the survey and said the company had made de-escalation training available to staff.

On Thursday, big US chains Target and Walgreens announced they would require customers in their stores to wear face masks in the coming weeks, a day after Walmart and other chains said they would enforce a similar policy.

“To be clear, we’re not asking our store employees to play the role of enforcer,” he said in a statement. “What we are asking is that customers help protect themselves and those around them by listening to the experts and heeding the call to wear a face covering.”

The new rules come as coronavirus infections skyrocket in the US. It recorded more than 70,000 daily cases for the first time on Thursday, as Florida and Texas both reported their largest single-day death totals to date.

Many state and local officials around the US have sought to balance containment of the pandemic with economic recovery, resulting in inconsistent public health policies from state to state and even county to county.

That has led to a recent push by corporations for more uniform policies across state lines, in the hope of lifting the mask-enforcement burden off hourly workers.

On Wednesday, the National Retail Federation asked its members to set a nationwide policy requiring customers to wear masks or face coverings, but added that retail employees “should not have to make a critical decision as to whether they should risk exposure to infection or lose their jobs because a minority of people refuse to wear masks”.

“One of the things that is most frustrating is that we continue to not have a federal strategy on how to navigate this issue of requiring face masks,” said Matt Priest, chief executive of the Footwear Distributors and Retailers of America. “You can’t ask retailers to be the enforcement mechanism when the federal government itself is not willing to put out some kind of mandate.”

Mr Johnson of Foot Locker said the lack of federal guidance had been a challenge.

“If there were an overarching federal policy, it would be a different situation,” he said, regarding mask-wearing compliance.

For now, he is holding daily and weekly calls with district managers and store managers to assess what he calls “the conflict over some of the rules around social distancing and capacity limits” from region to region.

He said that at Foot Locker, “no position is grounded in concrete” and he was open to amending or revising store policy decisions as circumstances merit.

Foot Locker operates more than 3,100 stores around the world, primarily selling lifestyle footwear from brands like Nike, Jordan, Adidas and others.

It has become synonymous with limited-edition releases of coveted sneakers such as Air Jordans, for which customers have traditionally formed long queues outside retail stores on release dates.