Cantillon: Medtech firm faces having to build on its successful flotation amid volatility 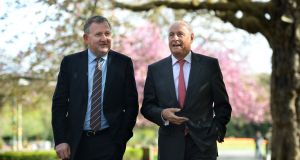 Medical supplies business Uniphar marks one year as a public company at the end of this week. It’s been an eventful maiden year for the company led by Mayo man Ger Rabbette and chairman Maurice Pratt.

The €139 million flotation on the junior Dublin and London markets followed what Rabbette conceded had been a tough grind getting financiers to part with their cash, even on the evidence of a decade of rapid expansion under his watch.

The successful flotation was a landmark development for a company that can trace its roots back to a small group of pharmacists in 1967.

Uniphar has delivered on its promise. One year on, the Dublin market is trading fractionally below the level of July 17th, 2019: Uniphar is trading at €1.75, a 52 per cent increase on the price at which the shares floated.

That has come despite the chilling ongoing influence of a potential hard Brexit and, more recently, the disruptive impact of the Covid-19 economic shutdown.

Now US brokerage Stifel thinks there is more to come. The group has initiated coverage of the Irish company with the price target of €3.10.

Stifel notes that, before its flotation, Uniphar had built a reputation both for delivering good organic growth, and for “successfully executing and integrating strategically important acquisitions”. It considers the Irish pharma and medtech services group to have shown over the past year that it can continue to deliver on both fronts, citing the €14 million acquisition of EPS Group and the €42 million acquisition of Durbin – itself a key driver of the decision to float last year.

Stifel notes that Uniphar still trades at a 12 per cent discount to other healthcare services businesses. But these are volatile times on global stock markets. Rabbette and his team will back themselves to execute strategy and expect double earnings within five years of the listing. Whether the share price will follow suit might yet be down to broader market dynamics.