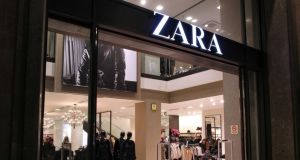 Zara owner Inditex’s proportion of online sales jumped 41 per cent to reach 10 per cent of net sales across the group in 2017. Photograph: iStock

A stronger euro took its toll on Spanish retailer Inditex in its latest quarter, leading to lower profit margins at the owner of clothing chain Zara, while a cold snap dragged on sales of spring fashions at the start of its financial year.

But its shares bounced back from early losses on Wednesday, as investors cheered strong online sales growth and chief executive Pablo Isla said margins should hold up this year.

Inditex, the world’s biggest fashion retailer by market value, is more affected by the strengthening euro than many European rivals because it sources a higher proportion of garments closer to home – rather than from, for example, Asian markets – allowing it to respond quickly to new trends. Société Générale analyst Anne Critchlow said.

Inditex’s proportion of online sales jumped 41 per cent to reach 10 per cent of net sales across the group in 2017, though that still lags some rivals. Sweden’s H&M, for example, makes about 12 per cent of sales online.

The Spanish company has invested in technology to merge online and store experiences.

Inditex, whose brands include upmarket label Massimo Dutti and homewares chain Zara Home, said gross margin dropped to 53.5 per cent in the quarter to the end of January from 54.8 per cent a year earlier.

Inditex reported net profit of €3.4 billion for the year to January 31st, up 7 per cent and in line with analysts’ expectations. The cash-rich company proposed a 10.3 per cent increase in the dividend to €0.75 per share.

Sales at constant exchange rates rose 10 per cent to €23.5 billion in 2017. On the same basis, sales grew 9 per cent in the first five weeks of the new financial year. This was slower growth than expected by some analysts, but rivals are also likely to have suffered from cold weather in early March which brought snow to many European cities, analysts said. – Reuters

1 Boeing identifies new software flaw in grounded 737 Max
2 Dublin housebuilder records €11m gain after striking deal with bankers
3 Hogan warns Britain on US trade deal as EU set to impose tariffs
4 GoMo is being investigated by advertising authority
5 Barclays to cut 100 senior roles as lender seeks to rein in costs
6 European shares touch all-time peak
7 ‘Life in Vilnius reminds me of Ireland in the 1990s’
8 Irish company that collects subscriptions for porn sites records €3m profit
9 Is Rebuilding Ireland Home Loan scheme open for business?
10 Irish people like nothing more than being bribed with their own money
Real news has value SUBSCRIBE