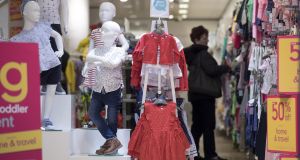 In its most recently filed accounts, the maternity and baby clothes retailer, which has 15 stores here, said the €1 million profit generated in the previous financial year came from a once-off gain attributable to the examinership process which the company had entered in 2015.

“Had this gain not arisen the company would have recorded a net loss”, the directors say in Mothercare’s most recently filed accounts for the Irish business. As a result, they said the €488,711 profit achieved for the financial year ending March 27th, 2017 represented a significant turnaround which would be sustained in the coming financial year.

The group sought the protection of examinership in 2015 to restructure the business and secure its long-term future on the back of what it said were unsustainable rents taken on during the boom.

A subsequent restructuring resulted in three stores being closed at Blackrock and Jervis Street in Dublin and Cruises Street in Limerick, and significant rental reductions being achieved.

The company’s latest accounts reveal the reduction in rents secured during the examinership. They show the chain’s operating lease rentals for the 12 months to the end of March last year were €2.44 million compared to €3.1 million in the previous financial year.

Shares in Mothercare in the UK fell this month after it warned that profits would disappoint and revealed it has opened talks with its lenders. The company, which issued a profit warning in January following dismal Christmas trading, said it expected adjusted pre-tax profit to come in at the lower end of the £1 million to £5 million range it had previously guided.

Mothercare is also working with its lenders as it seeks “waivers of certain financial covenants”, it said.