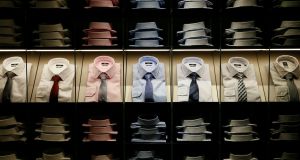 Hugo Boss announced in February that it is ending a partnership with designer Jason Wu, who led a push to expand its women’s collections from 2013. Photoggraph: Valentyn Ogirenko/Reuters

German fashion house Hugo Boss expects heavy investment on integrating its websites and stores to keep a lid on profit growth in 2018 even as a shift to add more casual styles helps sales to accelerate.

Hugo Boss shares were down more than 4 per cent by mid-morning, one of the biggest losers on the German mid-cap index as investors fretted about the higher spending.

The group will increase capital expenditure in 2018 to between €170-190 million from €128 million last year. Most of the money will go on revamping 150 stores and improving integration with ecommerce.

After a string of profit warnings in 2015 and 2016, chief Mark Langer reversed efforts to take the brand more upmarket and expand in women’s wear, focusing back on premium men’s clothing, but with a more modern twist.

Known for its sharp suits, Hugo Boss already makes more than half its menswear sales from casual styles, about 40 per cent from formal wear and about 10 per cent from shoes, Mr Langer told a news conference.

“The boundaries between formal wear and leisure wear are dissolving,” he said, noting that only one of the journalists attending the news conference was wearing a suit and tie.

The firm saw double-figure rises in sales of sports fashion and casualwear in 2017 and said new ranges were proving popular among buyers, including its “sports tailoring” collection presented at New York Fashion Week in February.

“We want to step up the pace of growth,” said Mr Langer on Thursday, a day after having his contract extended by three years to December 2021.

“The new Boss and Hugo collections are being very well received.”

Pilot stores with “digital tables” where staff can place orders online from a full range of products were performing well, Mr Langer said, adding Hugo Boss plans to roll out services such as “click and collect” to all its US and European stores this year.

Sales growth in 2018 should be led by the Chinese market, followed by Europe, with the Americas lagging but still growing, the company said, adding that its wholesale business will return to growth in 2018.

The luxury goods industry, including market leader LVMH and Gucci-owner Kering, has been benefiting from a recovery in demand from Chinese consumers.

Hugo Boss announced in February that it is ending a partnership with designer Jason Wu, who led a push to expand its women’s collections from 2013. Mr Langer said womenswear would remain an integral part of its offering even though sales fell in 2017.

Hugo Boss forecast currency-adjusted sales to rise in a low to mid single-digit percentage range in 2018, compared with average analyst forecasts for about 2 per cent.

However, it said investment will weigh on profitability, with earnings before interest, taxation, depreciation and amortisation (EBITDA) before special items expected either up or down two percent.

“There is likely to be some disappointment that improving sales momentum is still not dropping through to EBITDA, with the midpoint of 2018 guidance 5 per cent below consensus,” said UBS analyst Fred Speirs.

Hugo Boss, which had already reported a 5 per cent increase in currency-adjusted fourth-quarter sales, said that net income in the period fell 29 per cent to €45 million, missing analyst forecasts for €59 million.