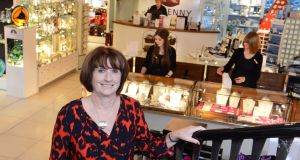 A bid to resolve a bitter dispute between a son and his mother concerning ownership of the well-known Kilkenny group of design retail stores has so far yielded “no compromise”, the Commercial Court has heard.

Greg O’Gorman initiated proceedings against his mother, Marian, in February 2017 and Mr Justice Brian McGovern was told some months later, in June 2017, the sides had agreed to explore mediation of the dispute.

The judge welcomed that news as “very wise” and said he hoped there would be a successful outcome.

However, on Monday, Rossa Fanning SC, for Mr O’Gorman, said there had been negotiations between the sides for some time concerning a resolution but unfortunately there was “no compromise at this time”.

In the circumstances, the parties had agreed the matter could be further adjourned to early next month so discovery affidavits could be provided, counsel said.

The judge adjourned the proceedings on that basis.

The action is by Mr O’Gorman, Castle Close Avenue, Blarney, Co Cork, against his mother, Marian, of Fernhurst, Tower, Blarney, Co Cork, who is chief executive of the company running the Kilkenny stores employing 300 people. She denies his claims.

Greg O’Gorman claims his mother “summarily terminated” his employment as group marketing director in July 2016 in a “humiliating” manner after 13 years service and “no suggestion of misconduct or non-performance” on his part.

This left him, his wife and three children “financially destitute” and he has been unable to get alternative employment, he said.

He claimed, despite promises over years of a share transfer for his hard work, his mother had in June 2016 publicly repudiated a signed “family constitution” document under which she held legal ownership of shares in the company in trust for the O’Gorman Family Business Partnership comprising himself and his siblings.

All four siblings hold a 25 per cent share, with the estimated value of his shareholding at €12.5 million, it is alleged.

At a company meeting of June 22nd, 2016, his mother read a prepared statement stating that the company was no longer to be considered as a “family company” and his employment was summarily terminated without reasons shortly afterwards, Mr O’Gorman claims.

The “enormous personal toll” of these events has been compounded by marital disharmony between his parents which lead to their separation after 41 years married, he added.