Consumers want to have their cake and eat it too 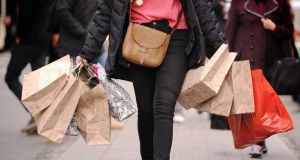 Despite the dominance of the big online retailers, stores remain the biggest shopping channel.

Two-thirds of Irish consumers are unhappy with the quality of personalised offers from retailers, but more than half are protective about their privacy and are opposed to retailers identifying them when they are nearby.

According to the 2018 Irish Retail & Consumer Survey, a major piece of research from PwC featuring more than 22,000 global participants including 1,000 in the Republic, consumers are attempting to get to grips with the transition to online shopping.

Similar to the global trend, more than half (52 per cent) of consumers are concerned about security when making payments via their mobile.

Owen McFeely, PwC director for retail and consumer practice, said there was a balance to be struck for shoppers between the convenience of personalised offers from retailers and the protection of personal information.

“Most consumers want brands and retailers to know enough about them to provide highly-relevant personalised offers, but they also want to be sure that all sensitive personal information isn’t misused,” he said.

More than half (51 per cent) of consumers are protective about their privacy and opposed to retailers identifying them when they are nearby to target them with offers. Globally, the figure is 37 per cent.

In general, more than three-quarters (77 per cent) of consumers expect to spend more or the same in the year ahead. Key concerns impacting their spending ability include Brexit and inflation.

Despite the dominance of the big online retailers, stores remain the biggest shopping channel. Nearly half (46 per cent) of consumers said that they shop in store at least weekly or more often.

The survey highlights that consumers like to shop in stores and will keep doing so as long as shops provide the right experience, combination of value, convenience, personal service and integrated physical and online services.

By way of example, the report says mobile was “very important”. It is the preferred method of payment in store for almost a third (31 per cent) of consumers, rising to 66 per cent for those under 34. Globally, the rate is 46 per cent.

The majority of respondents are unhappy with most elements of the in-store shopping experiences. Half (49 per cent) are not happy with sales associates’ knowledge of the product range; while two-thirds are unhappy with in-store wifi or personalised offers.

“Traditional retailers could be at an advantage as shopping behaviour in stores shifts more to the experience rather than just shopping, but the survey suggests more training of in-store staff is needed,” Mr McFeely said.

According to the survey, a quarter of consumers shop online at least weekly, rising to 38 per cent for 25-34 year olds. Given the figure is 51 per cent in the UK, the survey suggests online shopping in the Republic is set to increase.

More than 60 per cent of consumers have never shopped online for DIY, grocery, furniture, homeware or household appliances.