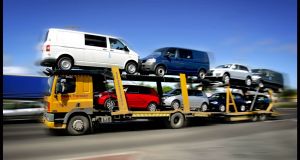 New figures from the Central Statistics Office show retail sales fell by 0.6 per cent in January amid an ongoing fall-off in sales of new cars.

Consumers are importing more used cars from the UK due to the current weakness in the value of sterling.

The sectors with the largest monthly volume decreases were department Stores (-4.2 per cent ) and car sales (-0.9 per cent).

The sectors with the largest month-on-month volume increases were other retail sales (18.4 per cent ) and pharmaceuticals, medical and cosmetic articles (8.1 per cent).

In a statement, the CSO said the latest retail numbers were calculated using updated weights for certain consumer items.