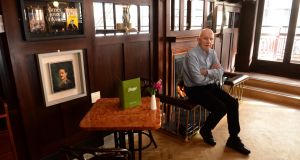 Bewley’s on Grafton Street is set to double its capacity from Thursday morning with the opening of the upper floors of its famous cafe.

This will allow it to cater for another 240 customers at a time, and to serve up to 1 million customers a year.

It should also do away with the daily queues that have formed since it partially reopened last November, following a €12 million refurbishment.

The new space will open at 10am and includes the James Joyce room, which has a balcony overlooking bustling Grafton Street.

Bewley’s is bracing itself for a busy few weeks, with Six Nations rugby match with Scotland on Saturday followed by Mother’s Day on Sunday. This will be followed by the St Patrick’s Day weekend, which is usually the busiest time of the year after Christmas, and then the Easter break.

Bewley’s chief executive John Cahill said the cafe has traded strongly since re-opening and is on target to increase its annual revenues to between €9 million and €10 million a year compared with €5.5 million annually before it closed in early 2015.

“We’ve had a great reaction [to the new cafe] and this will certainly bring us into the black,” he said.

Last week’s snow forced Bewleys to close on Friday and to curtail its opening hours on the Saturday. Turnover on Thursday was down by 40 per cent, according to Mr Cahill.

1 How long can Government afford to keep State pension age at 66?
2 In praise of Gogglebox Ireland, an essential service in all but name
3 Retailers accused of ‘stealing business’ from rivals by flouting restrictions
4 Outgoing Irish a sitting duck for Covid
5 Nama grants Ronan four-month extension on €160m glass bottle site deal
6 ‘French people are pretty relaxed. They don’t pander to scaremongering or hysteria’
7 How to improve ethics at your company
8 Budget 2021: fuel prices rise and high-emission cars hit
9 Wake-up Call: Why unethical high performers are not shunned by peers
10 Mamas & Papas collapses into administration
Real news has value SUBSCRIBE