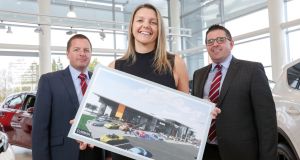 A family owned car dealer plans to invest £5 million (€5.6 million) in a new multi-franchise car complex in Newry which is expected to create 60 jobs when it opens next year.

Shelbourne Motors, which was established by Fred Ward in 1973, currently employs more than 130 people at its nine acre headquarters in Portadown where it operates four car franchises and four other related businesses.

The family owned firm, which sells an estimated 4,000 new and used cars each year, is now planning to open a second 50,000 sq ft site which will also include Northern Ireland’s first drive-thru service centre.

Paul Ward, a director of Shelbourne Motors, said it represents a “significant investment” for the family as its celebrates its 45th anniversary in business.

Mr Ward said: “We have come a long way since we launched our first car dealership in January 1973, which today, is the longest established official Toyota franchise in Northern Ireland.

“We are always looking to the future and our investment in this new state-of-the-art complex in Newry, with its significant focus on maximising the customer experience, is the next step to ensuring we grow our position within the local automotive retail and aftersales sector.”