Dublin docklands block will have 120 dwellings, and is expected to sell for up to €105m 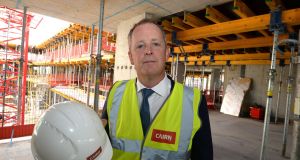 Cairn Homes could expect to sell its Hanover Quay apartment block for up to €105 million at current values, leaving the builder with a potential €40 million gain.

Cairn hopes to sell its Hanover Quay apartment block in Dublin in a single deal early next year. The development, in the capital’s docklands, will have 120 dwellings, a gym and restaurant.

With apartments in similar developments selling for between €800,000 and €900,000, along with the extra facilities at the site, sources estimate Hanover Quay’s value at €95 million to €105 million.

Cairn bought Hanover Quay for €22 million and the cost of building there – work will finish this year – is around €40 million, indicating a total spend of €62 million and giving Cairn a €40-million-plus return at current values.

The group has prepared an information memorandum on the property and has opened a data room to allow potential buyers to run the rule over it. Estate agent Savills is managing the sale.

Last year, Cairn indicated that a number of potential buyers for the entire development had expressed interest, prompting the company to decide to sell it in a single deal rather than apartment-by-apartment.

Likely purchasers are professional landlords intending to rent the apartments over the long term, cashing in on demand for accommodation in the capital’s centre.

Michael Stanley, Cairn chief executive, said on Tuesday that the company aims to build between 1,300 and 1,400 dwellings annually within two years, generating revenues of €500 million.

“That is up from the target we set at the time of our initial public offering, which was 1,000,” Mr Stanley pointed out. “That’s a very significant increase on that guidance.”

Cairn floated on the London Stock Exchange in 2015 and listed in Dublin last year.

The company is now building on 11 of its 34 sites and hopes to begin work on three or four more this year. The locations where construction is under way will hold around 4,000 homes.

The builder paid national broadcaster RTÉ €107.5 million for land in Donnybrook in south central Dublin last year. Cairn raised €50 million from shareholders ahead of this deal.

Mr Stanley explained that the company only sought cash from investors when there was “a compelling reason” to do so, such as the opportunity to buy the RTÉ site.

He pointed out that, should other opportunities arise, it was likely that Cairn would be generating its own cash at that point. However, Mr Stanley indicated that the group’s short-term focus would be on developing its existing sites.

Cairn expects revenues this year to reach €350 million, with a gross margin of around 20 per cent, as the housing shortage drives demand for new homes.