When car sales are excluded, spending rose by 8.2% in March, highest rate in three years 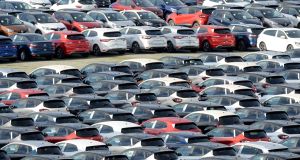 The Brexit-related slide in sterling has made it cheaper to buy used cars in the UK and import them into the Republic. Photograph: Alan Betson/The Irish Times

Retail sales hit a three-year high in March once car purchases are excluded, as consumer shrugged off the threat from Brexit.

Sales were up 8.2 per cent year-on-year in March, the highest rate of increase recorded in non-car retail sales for more than three years, reflecting the current strength of consumer spending in the Irish economy.

On a monthly basis, the March figure was down 0.8 per cent on February but, when car sales were stripped out, sales jumped 1.2 per cent on the previous month.

New car sales have also been affected by consumer uncertainty over whether to abandon diesel in favour of petrol or make the move to electric. Many are opting to wait and see how the technology revolution in the automotive world plays out before committing to their next new car.

The latest CSO figures show the sectors with the largest monthly volume increases were electrical goods, which rose by 2.7 per cent, and fuel, which rose 2.4 per cent.

The sectors that fared worst month-on-month in volume terms were the motor trade, down 7.1 per cent, and hardware, paints and glass, down 3.7 per cent.

KBC bank economist Austin Hughes said the data, excluding car sales, for March showed an exceptional year-on-year increase of 8.2 per cent, though this comparison is significantly flattered by the particular weakness of March 2018 data, when Storm Emma significantly curtailed spending.

Nonetheless, he said the underlying trend was particularly positive and suggested Brexit-related concerns have not undermined spending, “although they may have introduced a measure of caution in relation to some big-ticket purchases”.

“These data are very healthy but they certainly don’t suggest any major spending splurge when account is taken of both increased incomes and increased numbers of consumers in Ireland, ” Mr Hughes said.

He also cautioned that some of the year-on-year volume increase related to price discounting.

He linked the buoyant sales to recovery in the Irish housing market, which is most likely to be driving sales in certain sectors. “Home improvement considerations may also be driving strong demand for electrical goods, but technological change and falling prices are more important factors,” he said.

There was a similarly strong retail performance in the US last month, where consumer spending increased by the most in more than 9½ years in March. However, price pressures remained muted, with a key US inflation measure posting its smallest annual gain in 14 months.

The surge in consumer spending reported by the US Commerce Department on Monday sets a stronger base for growth in consumption heading into the second quarter, after it slowed sharply in the first three months of the year. Tame inflation, however, supports the Federal Reserve’s recent decision to suspend further interest rate increases this year. Fed officials are scheduled to meet on Tuesday and Wednesday to assess the economy and deliberate on the future course of monetary policy.

1 How can I view my dead brother’s will if I’m not the executor?
2 Provisional liquidator appointed to Dublin engineering firm
3 Travel costs for IDA chief topped €45,137 last year
4 Investors pile into Irish property as turnover in build-to-rent sector reaches €2.54bn
5 Facebook faces $9 billion tax trial in US over Irish offshore deal
6 Bursting of Tesla bubble a case of ‘not if, but when’
7 Mount Charles wins €10m catering contract at Maynooth University
8 Bank of Ireland staff in line for 2.95% pay increase
9 Germany drops opposition to fiscal boost in event of downturns
10 Glencore to shake up its top tier with younger leaders
Real news has value SUBSCRIBE