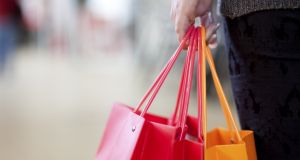 Women’s fashion sales were more than 6 per cent behind the market average, as more female shoppers choose online sellers such as Asos.

Sales of women’s clothing in Irish shops declined more than 2 per cent in the first three months of the year as the relentless growth of online shopping continues, according to the latest industry data.

Menswear sales rose by almost 5 per cent over the same period, however, with men considered less “fickle” by traditional retailers and less likely to swap the instore shopping experience for its digital equivalent.

It is produced in conjunction with research firm GfK and accountants Grant Thornton, with the data derived directly from the electronic tills of REI members, giving an early snapshot of the performance of the industry.

The figures suggest that like-for-like sales over the first three months of the year rose by 4.3 per cent on average across all retailing segments, which REI described as a “relatively robust” performance.

The breakdown between different sectors reveals a more mixed performance, with the performance of women’s fashion more than 6 per cent behind the market average, as more female shoppers choose online sellers such as Asos.

Segments connected to the booming property sector performed strongly. Furniture and flooring sales, for example, were up 9.5 per cent over the quarter, including a more than 12 per cent spike during February alone.

Garden centres sales rose by almost 57 per cent while agri-retail sales were up almost 17 per cent. Both segments suffered during the comparative period last year, which was disrupted by the “beast from the east” snowstorm.

Grocery sales rose steadily in each of the three months, according to the data, although coffee sales rose by less than 1 per cent overall.

“There was significant acceleration in online shopping over the period. It is, however, notable that the March rate of increase diminished as it was set against a huge spike in online shopping in March 2018 as consumers were confined to their homes due to the [poor weather].”