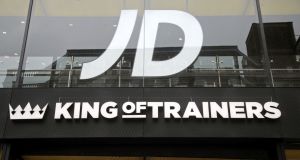 The company has bulked up over the past year with the purchase of US-based Finish Line and smaller rival Footasylum, and has gained from the “athleisure” trend, which sees people sporting gym clothes at work, school and other social occasions.

Britain’s retail industry has been hurt by lower consumer spending given uncertainties from the nation’s impending exit from the European Union, higher costs as well as a shift to shopping online.

JD Sports, with more than 2,400 stores that sell brands including Nike, Puma and Adidas, has weathered the storm thanks to its international footprint. Rival Sports Direct has faced a series of failed takeover attempts including Debenhams and Findel.

JD Sports, the owner of Footpatrol and Cloggs, did not cut prices in the Christmas period despite the difficulties in Britain that had other retailers scrambling to attract shoppers through heavy discounts.