Businessman served as senator for 23 years 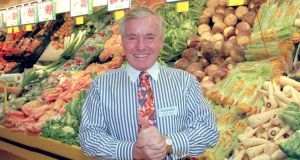 Businessman, politician and media personality Feargal Quinn has died at the age of 82 after a short illness.

In a long career, Mr Quinn was best known as the founder of the Superquinn supermarket chain. He was also an independent senator for 23 years.

He is survived by his wife Denise, children Eamonn, Stephen, Gilliane, Zoe and Donal, and 19 grandchildren.

Born in Dublin in 1936, he set up Quinn’s Supermarket in Dundalk in 1960 at the age of just 23, changing the name to Superquinn in the early 1970s. By 1976, the Sutton, Dublin-headquartered chain had expanded to seven outlets.

It became one of Ireland’s biggest grocery chains, employing thousands of people, and was credited with advancing standards of customer service for Irish shoppers.

The business was sold to a consortium of investors in 2005 for €450 million and was subsequently bought out of receivership by Musgrave Group, which rebranded the stores under the Supervalu name.

Mr Quinn was elected to the Senate on the National University of Ireland panel in 1993 and served as a senator until 2016, when he decided not to run again.

Other public roles included a period in the 1980s as chairman of An Post.

In recent years, he was known to television viewers as the presenter of RTÉ programme Retail Therapy, on which he offered advice to aspiring retailers.

He retained a regular column in the Irish Independent, the most recent of which - published today - reminded small business owners that their products must stand out as customers “only have seconds to form an opinion”.

In an article for the Irish Times in 1968, he discussed the upcoming challenge of decimalisation, advising that shopkeepers who were ready for the change would “have a great advantage” over their competitors.

His books included Crowning the Customer, Minding Your Own Business and his memoirs Quinntessential Feargal.

His remains will repose at Stafford’s Funeral Home, Strand Road, Portmarnock on Friday, 26 April from 5pm-8pm with removal on Saturday to St Fintan’s Church, Sutton arriving for 10am Mass. He will be buried in St Fintan’s Cemetery, Sutton.