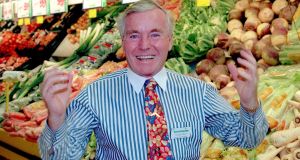 Feargal Quinn, who has died aged 82, pictured in the Sutton outlet of Superquinn in 1997. He opened his first shop in Dundalk in 1960. Photograph: David Sleator / The Irish Times

Feargal Quinn, who has died aged 82, has been hailed as an inspiring retail pioneer, tenacious business advocate, dedicated public servant and warm media personality. Alongside the many tributes paid to the Superquinn founder by those who knew him, former customers have succinctly expressed their gratitude. “Thanks for the sausages,” tweeted one.

Food retailing was in his blood. His father, Eamonn Quinn, was a Newry grocer who also operated a chain of Payantake stores in the Republic in the 1940s. Born in 1936, the young Quinn’s first experience in business was not in retail, but at his father’s holiday camp, Red Island, in Skerries, north County Dublin, where he worked as a waiter, pageboy, photographer and bingo caller.

Convinced that grocery shopping in Ireland was primed for a revolution, he opened Quinn’s Supermarket, his first store, in Dundalk in 1960, putting an emphasis on fresh food. He remained mindful of the lesson his father had taught him at Red Island: that the most important thing to do is to make the customer want to come back.

“The fact is that during the 1960s and 1970s, businesses had priorities other than the customer,” Quinn later wrote. “The day of the customer seemed to have passed.”

Quinn didn’t believe that shoppers should be made to feel like poor relations. At the start, this meant training counter staff not to engage in the kind of aggressive upselling he believed put Irish customers off at a time when few had shillings to spare.

In those early, pre-decimalisation years, Quinn’s did a roaring trade in cheap toilet rolls that could be picked up from the self-service aisles. In his 1990 book, Crowning the Customer, he wrote that his stores satisfied a latent demand that had been frustrated and “hidden by embarrassment”.

Quinn expanded the business to Dublin, moving the company headquarters to “a modern office overlooking sea and strand” in Sutton and changing the name above the door to Superquinn. By 1976, the company had expanded to seven outlets and was eyeing an eighth in Blanchardstown. Anywhere the population was growing, Quinn wanted to be.

Throughout his career, he was a great adapter. Some of what Superquinn became best known for over the decades – its superior sausage-making and in-store bakeries – Quinn had spotted on his travels across Europe.

Other innovations included the establishment of playhouses to occupy the young children of his customers and SuperClub, the first loyalty scheme of its kind in Ireland.

Quinn’s media profile is almost as long-standing as his retail business. In 1968, almost three years ahead of decimalisation, he wrote for The Irish Times about how shopkeepers should begin preparing for the change. By 2010, he was an iPhone lover with his own RTÉ “guru” vehicle, Retail Therapy.

He believed in spending time on the shop floor, at one point manufacturing tie-pins bearing the acronym “YCDBSOYA”, or “you can’t do business sitting on your armchair”.

Male executives who told him their wives always did the shopping “missed the point”, according to Quinn, who thought all managers should sample the customer experience, even if they did so only once a month.

Outside the retail world, his biggest public role in the pre-Seanad days was the decade he spent as chairman of An Bord Poist (which became An Post). In his memoirs, he wrote that he was motivated to take the position by the fact his father had met his mother at a post office in Dún Laoghaire.

Leinster-bound Superquinn held its own throughout some tough economic periods, as Quinn explained later. When the company began, “the economy was very poor”. In the 1970s, “things were very bad at that stage as well”, and as for the 1980s, well, “things were tough in those times too”. Still, Superquinn was known as a good employer and in the 1990s it introduced a profit-sharing scheme for staff. As the millennium approached, it employed thousands of people.

Frustrations crept in, however. In early 2005, Quinn gave a Sunday press conference confirming that he and his family were selling Superquinn for €450 million, the move sparked by the agony of being massively outbid by an international rival for what he hoped would be the site for a new outlet. This had happened repeatedly as property values soared.

The new owners of Superquinn were Select Retail Holdings, a consortium of investors that included developers Bernard McNamara and Gerry O’Reilly. Quinn stepped back from the business. A series of much-needed store refurbishments and a commitment to a “quality” market position followed, but sales declined as it lost its competitive edge in a more crowded grocery landscape, while borrowings fatefully rose.

In 2011, a debt-stricken Superquinn was bought out of receivership by Supervalu owner Musgrave Group and its 24 stores were duly rebranded as Supervalu three years later.

“That’s business,” said Quinn, pragmatic as ever, of Musgrave’s decision. “It’s no longer my baby.”

But that the rebranding prompted a wave of sizzling nostalgia from sausage-craving customers was evidence in its own right of the impact made by Feargal Quinn and Superquinn on Irish life over five decades.