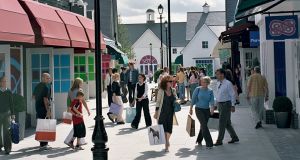 In addition to Kildare Village, above, Value Retail owns eight other outlets centres in Spain, Italy, France, Belgium, Germany and the UK, including the huge Bicester Village near London.

Value Retail, the owner of Kildare Village fashion retail centre, has shifted control of its almost €6 billion European portfolio of outlets centres from the UK to its Irish operation, in a move that the company says was spurred by Brexit.

In addition to Kildare Village, it also owns eight other outlets centres in Spain, Italy, France, Belgium, Germany and the UK, including the huge Bicester Village near London. They generated retail sales last year of €2.9 billion across more than 1,000 outlet stores, with brands such as Armani and Calvin Klein.

In recent weeks, Value Retail Management Ireland, the local entity that runs Kildare Village, has assumed ownership stakes in seven of the eight of the other European centres. It issued shares at nominal values to group companies in the UK as consideration for assuming control in a sweeping restructuring.

The Irish company has taken complete control of Value Retail’s operation in Germany, where it has centres in Frankfurt and Munich, and Italy, where it operates Fidenza Village near Bologna.

Company documents show that the Irish company has also assumed stakes in the Spanish operation, which includes La Roca Village in Barcelona, Brussels, and France, which includes the famous La Vallée Village in Paris. It is unclear from the documents whether these are majority or minority stakes. Control of Bicester Village did not transfer to the Kildare Village entity.

The Value Retail group in recent weeks also set up two new Irish companies that appear to have assumed control of all of intellectual property and software valued at €24 million, as well as a small stake in Bicester Village.

When asked about the restructuring, Value Retail’s response suggested that it chose to centralise control of its European centres in Ireland ahead of Britain’s planned withdrawal from the European Union.

Its original response did not address questions about whether the restructuring was part of its global tax strategy, and it did not respond to emails and calls seeking further clarification.

Value Retail’s business model is as a landlord to fashion brands, however it charges them a royalty fee based on sales instead of a fixed rent. Last year it obtained planning permission for a €50 million extension at Kildare Village.

The 2018 annual report for Hammerson, published last month, provides the most up-to-date financial snapshot of the Value Retail group. It states that the group has a complex ownership structure, with different investors owning different sized stakes in the various outlet centres.

The figures show Hammerson owns 41 per cent of Kildare Village, and suggest that it generated total royalty income last year of €20 million, with a proportional €8.2 million attributable to Hammerson.

Hammerson owns stakes in the other Value Retail Centres of between 15 per cent and 50 per cent, and spent £113.8 million increasing its share in 2018. It valued the entire Value Retail European portfolio at just over £5 billion (€5.8 billion), and said Hammerson’s share was worth £1.82 billion.