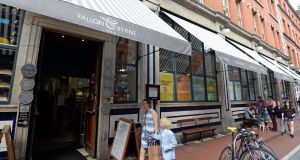 The high-profile Dublin food group Fallon & Byrne, which has annual sales of about €15 million and employs about 350 staff, is seeking out investors as it aims to double in size over the next five years. Mark Paul has details on how it has hired Goodbody stockbrokers to raise about €6 million of fresh capital to fund a major expansion plan, that will include a new retail outlet at Connolly railway station in Dublin, which may set the template for a wider retail rollout.

The Government has developed a revised strategy for the growth of international financial services here that it hopes will deliver 5,000 net new jobs here between 2020 and 2025. Ciarán Hancock reports that the figure reflects an acceptance that artificial intelligence technology and increased automation may lead to a reduction in the number of jobs in certain areas of the industry.

In this week’s agenda Barry O’Halloran looks into why some of the biggest investors in renewable energy globally are prepared to sink €6 billion into the Irish Sea on offshore wind farms.

This week’s interview is with serial tech entrepreneur Norman Crowley, who sees massive opportunities for innovative businesses in solving the world’s climate issues. Following the recent launch of his electric car start-up, Electrifi, he discusses plans for his next venture, focussed on the booming market for vegan alternatives to meat.

Elsewhere, Olive Keogh reports that ageism is rife in the workplace and is costing employers millions, while Ciara O’Brien asks whether, after cancelling the launch of its latest high-profile produce, Samsung’s ambition to dominate the new smartphone market now Fold?

Finally, John FitzGerald explains why the North’s poor education system has long been a recipe for failure.