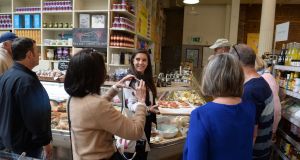 Tourists at Fallon & Byrne in Dublin. It is believed Musgrave and Dunnes both have designs on the foodhalls. Photograph: Dara Mac Dónaill/The Irish Times

Competition is hotting up between Dunnes Stores and Musgrave, which recently have been jockeying for position to acquire Irish “foodie” brands. To have two such acquisitive and heavily resourced suitors on the pitch is good news for quality Irish food businesses whose owners may want to exit.

Nominally, Dunnes and Musgrave, which owns SuperValu and Centra, compete in a straight head-to-head fight as normal grocery retailers. Dunnes and SuperValu are number one and number two in the cut-throat grocery market, where price is traditionally king.

In recent years, however, market dynamics have shifted. Lidl and Aldi have conquered the price-driven end of the market. The more expensive operating models of Dunnes and Musgrave will never allow them compete toe-to-toe with the German discounters on price, so the indigenous giants have had to try a different approach for growth.

As the economy has recovered, consumer buying behaviour has changed. Low prices are no longer the be all and end all; many Irish grocery shoppers now also seek quality Irish branded produce. On this turf, Dunnes and Musgrave can get ahead of the Germans, as Lidl and Aldi are predominantly own-brand retailers.

Rather than build their own brands, the focus for Dunnes and Musgrave has been on buying upscale Irish epicurean names, be they other food retailers or food-service brands, to slot into their operations.

Last year they scrapped for Donnybrook Fair, where Musgrave prevailed with a €25 million deal including debt. Now, it is believed, the supermarket rivals both have designs on Fallon & Byrne, the Dublin group of foodie outlets.

Dunnes stole a march on Musgrave with earlier deals for the James Whelan chain of high-end butchers, Café Sol, and its partnership with Sheridan Cheesemongers. It is also circling the Base Wood Fired Pizza restaurant chain.

Musgrave, buoyed by its Donnybrook Fair success, now appears determined to play catch-up. Expect the two supermarket giants to rival each other again and again for deals in coming years, in their hunger for Irish food brands.