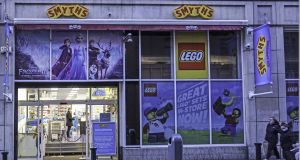 A branch of Smyths Toys in Jervis Street, Dublin, Ireland. Smyths is a multinational business with over 200 stores in Europe

Revenues at the  operations of  toy giant Smyths Toys in Britain and Northern Ireland increased to a record €737 million in 2019, new accounts show.

Accounts filed by Smyths Toys UK Ltd, which focuses on Britain, show the company’s pretax profits declined by 14 per cent to £12.48 million in 2019 as the company expanded further in Britain.

The company operates 104 stores in England, Scotland and Wales and an additional seven in the North, where pretax profits for 2019 totalled £904,000.

On the 2019 performance of the UK company, the directors state that they are pleased with the result, particularly given the current economic climate and the competitive market place.

The UK firm last year recorded a gross profit of £130.37 million and selling and distribution expenses of £117.89 million, resulting in a pretax profit of £12.4 million.

On the impact of Covid-19, the directors say that up to March 2020 the company had been performing strongly. They note that the company’s stores were shut during the first Covid 19 lockdown and reopened last June.

The directors add that based on company forecasts and a range of different scenarios, they are satisfied that with the current levels of reserves, utilising available government supports and tight cost-control measures for the period of the pandemic, the company can sustain its operations in the current volatile environment.

The firm only entered the UK market in 2007, and its business has grown exponentially there since then.

On the group’s future developments, the directors state that “further expansion will occur in the UK market in the coming years through the opening of new stores”.

Underlining its expansion in Britain, the company in 2019 spent £19 million on the purchase of property, and this followed a spend of £14 million under the same heading in 2018.

The expansion in 2019 in the UK contributed to the firm’s lease costs increasing from £26.96 million to £30.3 million, while the firm’s non-cash depreciation costs topped £12 million.

The company recorded a post-tax profit of £9.4 million after paying corporation tax of £3 million.