Next reports better than expected sales despite Covid restrictions 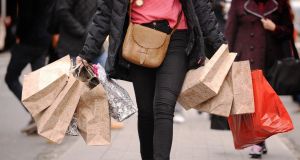 British fashion retailer Next, which has 12 stores in the Republic, said its sales in the nine weeks to December 26th were much better than it had expected, although an additional property provision resulted in it nudging down its pretax profit forecast for the year.

Next, the first major UK-listed non-food retailer to update on Christmas trading, said full-price sales fell 1.1 per cent on last year, beating its central guidance of 8 per cent given in October.

That came despite the impact of Covid-19 restrictions on trading in stores and constraints on online capacity.

The sales performance would have boosted full-year pretax profit to £370 million (€410 million), which would have been its fourth upgrade in five months, but it said two exceptionals had resulted in new guidance of £342 million (€379 million) for the year to end-January.

It said it anticipated a 14 per cent loss of full-price retail sales in January due to the lockdown closure of 90 per cent of its stores and it would also incur costs clearing more of its retail end-of-season sale stock online.