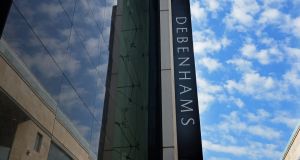 The former Debenhams store on Dublin’s Henry Street. The retailer closed all its Irish stores in April 2020 with the loss of 2,000 jobs. Photograph: Eric Luke

Collapsed retailer Debenhams has closed its online operation in the Republic, citing Brexit, in a move that terminates its presence in the market.

All Debenhams stores in the Republic closed in April when the Irish operation went into liquidation with the loss of 2,000 jobs, but customers were still able to buy online from the retailer until recently.

The British parent company followed the Irish subsidiary into liquidation in early December, and has continued to sell its remaining stock online since then.

However, a notice placed on Debenhams.ie over the Christmas period apologised to customers, saying it is “currently unable to deliver orders to the Republic of Ireland”, attributing this to “uncertainty around post-Brexit trade rules”.

It said it had “made the difficult decision to temporarily switch off Debenhams.ie”. Customers in the Republic will not be able to order goods through Debenhams.com and any returns made from January 1st onwards will cost customers postage charges, while a VAT charge may also apply. ITV News reported on the move on Thursday.

While trade in goods between the UK and the EU will not be subject to tariffs under the Brexit agreement, goods imported into the UK from elsewhere and then exported on to EU countries may not be exempt from tariffs. This has forced British retailers to reassess their approach to selling into EU markets including the Republic.

As well as the spectre of possible tariffs on goods originating outside the UK, people in the Republic ordering from UK sites are now liable to Irish VAT on goods above a value of €22. Many UK sites are now adding this to the price at checkout. In cases where they do not, shoppers will be asked to pay Irish VAT upon delivery.

Since January 1st, Amazon UK has levied an “import fees deposit”, which it says it is using to reimburse delivery companies for import fees they pay on behalf of a customer. In the event the deposit exceeds the final import costs, Amazon says it will refund the difference.

However, many popular retailers with their headquarters in the UK – such as online-only fashion sites Asos and Boden – operate dedicated EU sites, meaning customers in the Republic who order from them will not face any new charges.

9 Netflix to raise prices for subscribers in Ireland