Company delivered 14m parcels in December, double the level of same period in 2019

An Post operates the Dublin Parcel Hub from its ecommerce campus in West Dublin and is handling 3.3 million packages a week in the lead up to Christmas. Video: Bryan O’Brien 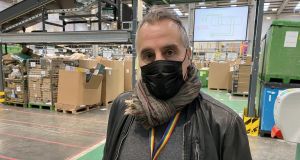 David McRedmond: An Post has about 116 sorting offices but ‘maybe five are fit for handling parcels’. Photograph: Bryan O’Brien

An Post is planning a €100 million-plus investment in new infrastructure over the next three years to cope with the surge in parcel deliveries driven by the explosion in online shopping in the pandemic. In addition, the company plans to spend tens of millions of euro on upgrading its IT systems and on enhancing its financial services offering as part of a new group strategy that will be unveiled in the next month or so.

Speaking to Inside Business, an Irish Times podcast, An Post chief executive David McRedmond said: “We’re looking at somewhere north of a €100 million investment in infrastructure to deal with the switch from being a mails business to a parcels business. We’ve got about 116 sorting offices ... Maybe five are fit for handling parcels.”

“So we have to rebuild all of that estate and that’s going to be a massive piece of work. We’re going to have to build a super-site to handle parcels through to 2030 or 2040. We want to have an all-electric fleet. That’s the sort of investment we need just for the ecommerce side of the business.

“The other piece is ... all the time we’re investing in IT systems to support ecommerce. We’re also building out a financial services ecosystem and have already spent €17 million on that and we’ll be investing very heavily in that. We’ve a lot of investment to make.”

This funding will come from a mix of the company’s own resources, developing some of its property portfolio and loans from the European Investment Bank.

Mr McRedmond said An Post delivered 14 million parcels in December, double the level of the same period in 2019. This was driven by growth in online shopping last year by consumers who were forced to restrict their activities amid lockdown restrictions. Half of those parcels originated from retailers in the Republic, with 35 per cent from the UK, he said.

He said An Post’s revenues were on a par with 2019 (when revenue was €892 million), with parcel volumes up 100 per cent and letter volumes down about 10 per cent. He said the company would record an operating profit for the year but depreciation costs would leave it with a bottom-line loss.

The State-owned postal group spent €55 million on various measures related to coping with the pandemic. “It has been incredibly expensive ... anything from PPE, spending close to €10 million on that, through to overtime to all the Covid-related problems,” he said.

On the outlook for this year, Mr McRedmond said: “We expect a very rapid recovery once we get out of this lockdown towards the second half of 2021.”