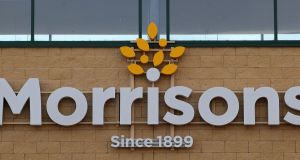 Strong sales of champagne and whole salmon helped supermarket group Morrisons to outpace bigger rivals over Christmas as Britons made up for pandemic-related restrictions on pubs and restaurants by treating themselves at home.

That compared with analysts’ average forecast for a rise of 8.3 per cent.

Industry data from market researcher Kantar, published on Tuesday, showed all of Britain’s supermarket groups benefited from unprecedented Christmas demand due to the Covid-19 pandemic, with UK shoppers spending £11.7 billion (€13 billion) on groceries in December.

Restrictions to stem the spread of Covid-19 mean a large chunk of the UK’s population is still working from home and most of its hospitality sector is closed.

Supermarkets also had more mouths to feed, with many of the 5 million or so Britons who normally travel abroad for Christmas staying in the UK.

“All customer and brand metrics are up, market share is up and we’re growing as a multi-channel business,” Morrisons chief executive David Potts told reporters.

He highlighted champagne sales up 64 per cent compared with last year and whole salmon sales up 40 per cent.

Mr Potts also said Morrisons had not seen any material disruption to supplies from the EU after January 1st, when a new EU-UK trade deal kicked in.

Morrisons said it still expected 2020/21 profit before tax and exceptionals of £420-440 million, prior to a business rates payment of £230 million.

That is despite direct Covid-19 costs for the year rising to £280 million.

Shares in Morrisons were down 0.2 per cent in early trading.

On Monday, German-owned discounter Aldi reported a 10.6 per cent year-on-year rise in UK sales for the four weeks to December 24th. – Reuters