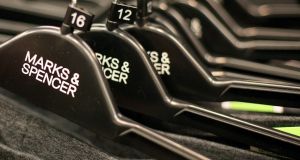 The move to buy up Jaeger would fit with M&S’s new strategy of selling third-party brands, with existing tie-ups with the likes of Nobody’s Child and Ghost. Photograph: AFP via Getty

The retail bellwether is understood to be in the final throes of sealing a deal to buy the Jaeger brand and stock, as first reported by Sky News.

But any acquisition is not set to include the chain’s stores, which have already been slashed by 13 to 63 with at least 103 jobs axed.

Jaeger was placed into administration alongside sister firm Peacocks in November by Dubai-based owner and retail billionaire Philip Day.

The tycoon’s EWM Group had already called in administrators for its Edinburgh Woollen Mill and Ponden Home business earlier in November.

Jaeger’s online shopping operations have remained open and continued to trade as normal throughout.

The move to buy up Jaeger would fit with M&S’s new strategy of selling third-party brands, with existing tie-ups with the likes of Nobody’s Child and Ghost.

It is also thought to be among those in the running for some of Sir Philip Green’s collapsed Arcadia Group brands, such as Topshop.

It comes ahead of M&S’s Christmas trading update on Friday, which is set to reveal the scale of the impact on its clothing stores of lockdowns and tighter restrictions.

The group is expected to report strong food sales as the grocery industry was buoyed by the closure of bars, restaurants and cafes.

Its clothing sales performance will be watched closely, however, to see how much of the store closures impact was offset by online trade.