Shutdown of retail a ‘significant blow’ for sector 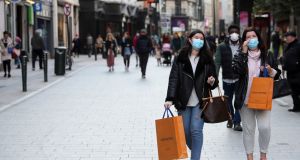 Many in the retail sector had expected to face another closure after Christmas but not this soon, according to Retail Excellence deputy chairwoman Jean McCabe. Photograph: Brian Lawless/PA Wire

Representatives of the retail sector expressed “bewilderment” that non-essential stores are once again being forced to shut their doors despite an absence of evidence they are contributing in a significant way to the spread of coronavirus, as the Government moved the State to full Level 5 restrictions until February.

“It wasn’t much longer than 48 hours ago that the Taoiseach was saying he did not believe non-essential was a hive of Covid-19 transmissions and he said he did not think closing it down would have a material effect on infection rates,” said Duncan Graham, chief executive of Retail Excellence, which has more than 2,000 members nationwide.

“So to hear that from the Taoiseach one day and then to be told days later that we have to close again leaves us frankly bewildered,” he told The Irish Times.

Mr Graham pointed out that retailers had done all that was asked of them throughout the crisis in terms of crowd control and store sanitisation and more recently when it came to the winter sales.

Retail Ireland, the sector’s lobby group within Ibec, said the move to Level 5 restrictions until at least the end of January was “a major disappointment and a significant blow”. It said the focus must now be on reducing case numbers so the restrictions can be safely unwound.

“While retail has demonstrated it is a safe setting for customers and staff, there is now clearly an aim to dramatically reduce all movement across society,” said Arnold Dillon, Retail Ireland’s director.

“Now that the decision is made, it is vital that these measures work, and we are soon in a position to reopen again. The rapid roll out of the vaccine is now essential to avoid prolonged disruption.”

Jean McCabe, the owner of Willow boutique in Ennis, said she was “grateful” to have been allowed reopen for Christmas trading and that many in the sector had already expected to be shut down for January.

“I just didn’t expect the shutdown to come so soon after Christmas,” said Ms McCabe, who is also deputy chairwoman of Retail Excellence.

She said she would use Willow’s online operation to shift stock that would normally be offloaded in the store during post-Christmas sales. She said her business had traded strongly in December: “I haven’t spoken to a retail who didn’t have a bumper Christmas.”

She acknowledged that although there is no data to show retailing greatly contributes to the spread of coronavirus, the shutdown should to be seen in the context of the need to prevent general movement by citizens.

“I don’t know if it will have much of an impact on virus numbers. But it is the psychology of it, I suppose, and the fact that the Government just doesn’t want people to leave their homes unless it is essential. As case numbers come down, hopefully retail can reopen,” said Ms McCabe.

Mr Graham said footfall in shops in recent days was down 50 per cent on last year, as retailers heeded Government warnings not to promote sales. He stressed that the entire retail space was entering its quietest period of the year in any event.

“This latest lockdown comes just after we have gone through a Christmas period without any indication of clusters of Covid coming out of retail so why close us now just as things are getting very quiet anyway?”

The Government has put the restrictions in place initially until the end of January, although there are fears in the sector it could last longer if virus numbers remain stubbornly elevated. Mr Graham said that if it lasted two or three months many retailers would have been “shut for half the year and that just isn’t sustainable”.