Net income up 95% for group, which was recently acquired by Carlyle Cardinal Ireland 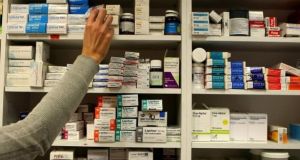 The jump in profit came as full-year turnover increased to €78.8 million from €74.8 million

The group, which operates 30 stores and employs 600 people in Ireland, reported a €4.6 million profit for the 12 months ending October 2nd, 2016. This marks a 55 per cent increase versus the €2.97 million reported a year earlier.

The jump in profit came as full-year turnover increased to €78.8 million from €74.8 million.

Sam McCauley Chemists was founded in 1953 in Enniscorthy, Co Wexford, as a family-owned store. It has since grown to become one of the largest pharmacy chains in Ireland.

His appointment comes after the Competition and Consumer Protection Commission last month approved CCI’s takeover of the group.

The buyer is a partnership of US-based Carlyle Group and Irish investors Cardinal Capital.

The €292 million private equity fund has a number of other Irish businesses including chilled meats processor Carroll Cuisine chocolate maker Lily O’Briens and motoring organisation AA, the latter of which it acquired for €156.6 million last year.

CCI said it intends to double the size of the pharmacy chain over the next three-to-five years through a combination of organic and acquisitive growth.

1 Michael Smurfit: ‘I asked Trump to invite me to the White House for my 80th birthday’
2 ‘I’m so lucky to be in the Caribbean – a million miles from Derry Girls’
3 Irish business of Carluccio’s restaurants to be wound up
4 Covid-19: Small businesses are left as cannon fodder in our zealous anti-virus experiment
5 Major investment in ports for offshore electricity industry urged
6 Revenue fears fraudsters tapped bank details of 3,000 taxpayers
7 Charlie Chawke plans 290 apartments and hotel on Goat pub site
8 Joint accounts: if one of us dies, can the other access the money?
9 Tax and the Pandemic Unemployment Payment: Your questions answered
10 HSBC board rethinks overhaul and seeks even deeper cuts
Real news has value SUBSCRIBE