Toblerone shapes up to Dealz owner in row over Twin Peaks

Confectionary giant gets the hump with budget chain over copycat bar 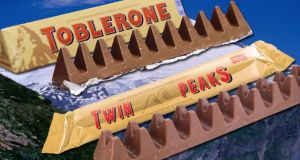 Poundland was initially forced to delay the launch of its Twin Peaks bar, which has two humps rather than the single peaks of Toblerone

Poundland, the owner of the Dealz franchise in Ireland, has claimed Toblerone’s shape is no longer distinctive enough to be a valid trademark, in legal documents defending its right to launch a copycat bar.

Last month, the budget chain was forced to delay the launch of its Twin Peaks bar, which has two humps rather than the single peaks of Toblerone, after a legal warning from the brand’s owner, a Swiss division of Mondelez.

Documents reveal the legal wrangle has escalated, with a claim and counter-claim filed at the high court.

Toblerone is one of Poundland’s most popular products, with 11 million bars sold last year. But the retailer says it decided to bring out Twin Peaks “in response to the unfavourable reception” that greeted Toblerone’s new version with fewer chunks, launched last year.

Speaking at the time of the launch, Poundland’s trading director, Barry Williams, said it had created an alternative with “a British taste, and with all the spaces in the right places”.

In legal defence documents filed earlier this week, Poundland says the triangular prism shape of the Toblerone bar, which was registered under an EU trademark in 1997, is no longer distinctive partly because of the existence of the new version.

It claims that any good reputation enjoyed by the Toblerone bar trademark has been “irretrievably abandoned” by the launch of the product with bigger gaps between its nine chunks, which the public “consider unfavourably in comparison”.

Poundland also says the 12-chunk registered version is no longer on sale in the UK, where an 11-chunk bar has been sold since about 2010.

The legal row echoes Nestlé’s long-running battle with rival Cadbury, also owned by Mondelez, to trademark the shape of the KitKat bar in the UK. In the latest round, the court of appeal ruled that the four-finger design of Nestlé’s product had “no inherent distinctiveness”.

Sally Britton, an intellectual property lawyer at Mishcon de Reya, said the Toblerone battle covered the same issue of whether a shape could be distinctive enough to function as a trademark.

“A trademark is something that distinguishes your goods and services from others. The more you use a mark consistently, the stronger your rights should be. There is an argument that Toblerone is weakening its rights by changing the shape of its bar,” Britton said.

She said Toblerone clearly was a distinctive shape and, unlike KitKat, already registered as a trademark, which was why Mondelez was so keen to prevent its mark from becoming generic.

“If other businesses are selling chocolate bars of an identical shape to Toblerone it could be argued that its shape is losing its distinctiveness and is not functioning as a trademark. That’s why Toblerone is taking action,” Britton said.

Poundland claims in the court documents that the shape of Twin Peaks “is new and creates a different overall impression upon the informed user”, adding that it had successfully applied for a UK-registered design protection of the bar’s double-humped shape, which is supposedly inspired by the Wrekin, a hill in Shropshire near the company’s head office.

The document claims that the soft “formless packaging” of Twin Peaks, and its clearly different name and shape, mean “no member of the relevant public would mistake one for the other”. It also says the products taste different.

Mondelez claims Poundland and its supplier Walkers Chocolates have infringed its trademarks on the overall shape of the bar, the pyramid-shaped chocolate chunk or “peaks”, prism-shaped gold Toblerone packaging and the Matterhorn mountain logo.

It says Poundland’s Twin Peaks bar is “deceptively and confusingly similar” to Toblerone to the extent that shoppers may believe it is produced by Mondelez or has been otherwise approved by the company.

The claim by Mondelez says it made £17million in net revenues from Toblerone in the UK last year and spent £4.3 million on marketing.

The company is seeking damages in relation to trademark infringement and “passing off” against Poundland and Walkers Chocolates. Although the Twin Peaks bar was flagged in an ITV documentary and promotional bars were sent out to journalists, it has never reached store shelves. Mondelez and Poundland declined to comment.

1 ‘I don’t need to do any of this. . .I don’t actually need to work.’
2 Direct sea routes to Europe offer certainty in choppy Brexit waters
3 Pavlok: zapping bad habits with 450 volts
4 Pandemic boosts sales for Dell and HP as revenues exceed estimates
5 Move to EU or face disruption, City of London is warned
6 A tale of two pandemics for Smurfit Kappa and Greencore
7 How to . . . move (almost) everything to your new phone
8 Admission of mistake in Oxford vaccine dose raises doubts over reliability
9 Pfizer’s Upjohn spin-off completes merger with Mylan to form Viatris
10 Can I regain first-time buyer status by walking away from rights to home?
Real news has value SUBSCRIBE